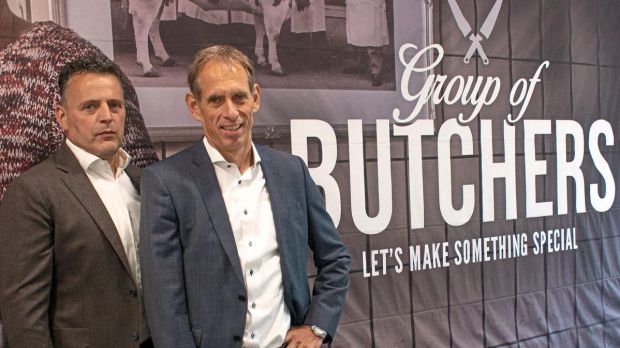 Wilbert Wolfs (l.), one of the two founders, and CEO Remko Rosman still see a lot of expansion potential for their company.

THE NETHERLANDS, Tilburg. The Dutch meat processor Group of Butchers wants to continue its growth story and is therefore aiming for further acquisitions and mergers in its home country and in Belgium. Acquisitions are also planned in Germany. This is reported by the Lebensmittel Zeitung (LZ).

The Group of Butchers (GoB) from Tilburg in the Netherlands has its sights set on the German market. After acquiring the companies Hartmann (Warendorf) and Gmyrek (Gifhorn) in 2018, GoB wants to further expand its presence in this country in order to achieve its ambitious sales targets. By the end of 2024, annual sales are to be more than doubled to around 1 billion euros. Revenues in Germany alone are to increase from 100 million to at least 300 million euros in the same period. In its home country, GoB has sales of around 300 million euros and in Belgium 40 million euros. Organic growth has averaged 8 percent per year over the past four years.

The group, which has been majority-owned by Dutch investment company Parcom since 2020, is currently in talks with several German companies, CEO Remko Rosman tells LZ: "There is already a shortlist." The consulting firm Herax Partners is helping in the search for cooperation partners.

The interest is not in ailing companies, but in healthy ones that have an annual turnover of between 20 million and 200 million euros and want to grow with GoB. "We are looking for successful, specialised, regionally positioned family businesses and not restructuring cases," emphasises Wilbert Wolfs, one of the two company founders. GoB also sees potential in the Netherlands and Belgium. Rosman: "By the end of the year we will take over one or two more companies there. After the market leaders, we are now focusing on the number 2 and 3 in their category." Acquisitions are planned in sausages, but also in veggies, salads, soups or hummus. "Meat, however, will remain dominant," Wolfs said.

Business in Germany is considered low-margin

The meat business in Germany is considered low-margin, even though the purchase price for pork is currently low, much to the chagrin of producers. The companies in the sector find themselves in a sandwich position between a few meat suppliers and a handful of customers in the food retail trade (LEH). To make matters worse, both sides produce large quantities of sausage themselves. Industry expert Klaus Martin Fischer of the consulting firm Ebner Stolz therefore predicts that in the long run only about 35 companies will remain of the currently almost 150 independent producers, who represent nearly two-thirds of the total market.

„"Germany is very competitive, but we don't shy away from competition"“
REMKO ROSMAN, CEO OF THE GROUP OF BUTCHERS

Consolidation is already in full swing. The Zur Mühlen Group of the Tönnies Group is particularly prominent in this process. It has taken over numerous companies and is the clear number one in Germany with an annual turnover of about 1 billion euros. The number two in the industry, The Family Butchers (TFB), was created at the beginning of 2020 from the merger of the family businesses Reinert and Kemper. Similar to Group of Butchers, TFB sees itself as a platform for other families in the sausage industry and invites SMEs to join. So far, however, this has not happened. The Wolf Group also has ambitious goals. With a turnover of 320 million euros, it is number four in the German meat products industry. Through organic growth and acquisitions, owner Christian Wolf wants to increase the annual turnover to 500 million euros.

After consolidating on the Dutch and Belgian markets, GoB produces 1,200 t of goods a week with 1,000 employees at eleven locations, supplying 4,000 retail locations. If GoB were to achieve the targeted turnover of 300 million euros in Germany, this would mean a leap into the top 5 of German sausage producers as things stand.