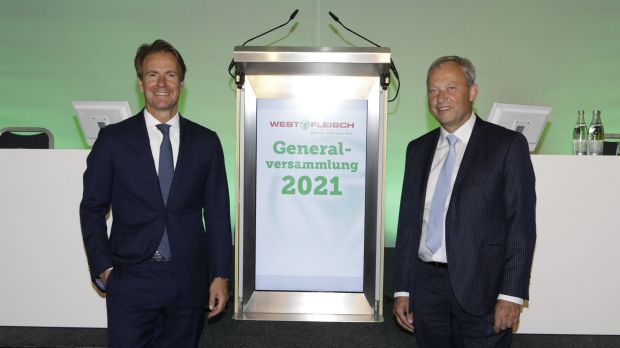 Carsten Schruck (l.) and Johannes Steinhoff form the dual leadership of the Executive Board of Westfleisch SCE.

GERMANY, Muenster. At the general meeting, it was reported that Westfleisch and its board member Steen Sönnichsen will go their separate ways in the future.


The three-member executive board of Westfleisch will temporarily become a dual board. At the general meeting, supervisory board chairman Josef Lehmenkühler reported that the Münster-based meat marketer and its board member Steen Sönnichsen will go their separate ways in the future: "In the past three and a half years, we have been able to achieve a lot together, for which we are very grateful to Steen Sönnichsen."

The cooperative is accordingly well equipped for the tasks of the coming months and years, but these "will certainly not become easier - on the contrary," Lehmenkühler emphasized. "In this situation, it is essential that the leadership of our company agrees on how and in what way we want to shape the future of our cooperative." Steen Sönnichsen's ideas in this regard have increasingly diverged from those of the others in recent months, he said.

"On the one hand, this is regrettable, but on the other hand, it is nothing unusual," Lehmenkühler explained. "It's a development that happens again and again in companies. The only thing, and this is the important thing, is that when this unity is no longer there, you should part ways." Lehmenkühler wished Sönnichsen "all the very best" for his professional and private future. Sönnichsen's tasks will initially be taken over by his previous colleagues on the board, Carsten Schruck and Johannes Steinhoff. In the long term, the executive board will again be made of three people.

Chief Financial Officer Carsten Schruck reported at the AGM that Westfleisch had "mastered the challenging year 2020 properly." Slaughter numbers once again decoupled from the negative industry trend, with 7.5 million pigs and around 436,000 cattle; sales rose by 1.3% compared to 2019 to €2.83 bn.

Moreover, despite high additional costs in the wake of the Corona pandemic and African swine fever, net income fell by only € 2.6 mill. to € 8.1 mill. The cooperative's approximately 4,800 agricultural members and shareholders will also benefit from this: as the meeting decided, they will receive a dividend of 4.2% on their business assets as well as other special bonuses.

Unsatisfactory start to the year

Schruck and Steinhoff also reported an economically "rather unsatisfactory start to 2021" at the general meeting. "The closed hotels and restaurants, the empty canteens and the difficult export situation put some significant pressure on our sales," Steinhoff said. He added that business with food retailers, which was still running decently, was far from being able to compensate for this downward trend. Finally, the rainy spring and the pandemic-related contact restrictions had led to an almost complete loss of the important barbecue business; moreover, cost increases were an additional burden in many places.

"But there are also points that make us more optimistic," Schruck emphasized. "The third wave has broken, business with restaurants and hotels will pick up, the weather is getting better, and the barbecue business will still increase." Still, he said, it's clear that "this year will be even more challenging than 2020."