Launch of the trade-fair season for the global food industry 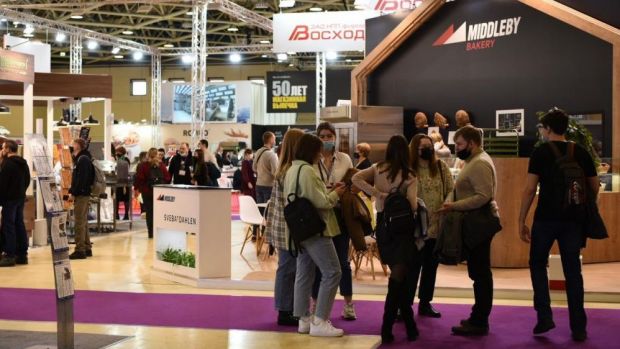 RUSSIA, Moscow. With Modern Bakery Moscow, Messe Frankfurt successfully held its first live trade fair in 2021 in Europe. Other trade shows for the global food industry are already in preparation. Process Expo in Chicago is still being planned for this year.


Meat Pro Asia is due to be held in Bangkok at the beginning of 2022, followed by Tecnofidta in Buenos Aires and the leading trade fair, IFFA, in Frankfurt in the first half of 2022.

Following the raising of the ban on congresses and exhibitions in Moscow, Messe Frankfurt’s Russian subsidiary organised the first physical trade fair of 2021 in Europe. Two years after the last edition, the leading CIS-wide trade fair for bakery and confectionary technology, Modern Bakery Moscow, opened its doors from 23 to 26 March. 214 exhibitors from 15 countries and 17,309 visitors met up at the event to establish business contacts and to collect wide-ranging information about the market and the prospects for the sector.

Kerstin Horaczek, Group Show Director Technology at Messe Frankfurt, was very pleased: “Amid the persisting difficult conditions, Modern Bakery was a huge success and a positive sign for a new start on the international trade-fair scene. Both exhibitor and visitor numbers were at pre-crisis levels. In 2021 and 2022, we are looking towards further buoyant events in the field of food technology, which seem to be dovetailing seamlessly with the positive economic climate that existed before the pandemic.”

After many trade fairs have had to be cancelled or postponed over the past months, because of the coronavirus pandemic, Process Expo 2021 will be one of the world’s first major trade fairs for the food and drinks processing and packaging industries. It will be held for the first time from 2 to 5 November as a joint venture between Messe Frankfurt and the American industrial association, the FPSA.

Messe Frankfurt has a presence for the global food industry at six events on four continents, e.g.: Meat Pro Asia, a joint project with exhibition organiser VNU Asia Pacific, from 12 to 14 January 2022 in Bangkok. Tecnofidta in Argentina, which will take place from 22 to 25 March in Buenos Aires. From 14 to 19 May 2022, the leading international trade fair, IFFA, will assemble all the sector’s major players in Frankfurt am Main.

The live fairs are accompanied by various digital formats and link the sector from year to year. They include, for example, the online panel relating to the Future Meat Factory, which Messe Frankfurt organises with its partners Builtworld, and the digital discussion forum Tecnofidta Conecta.