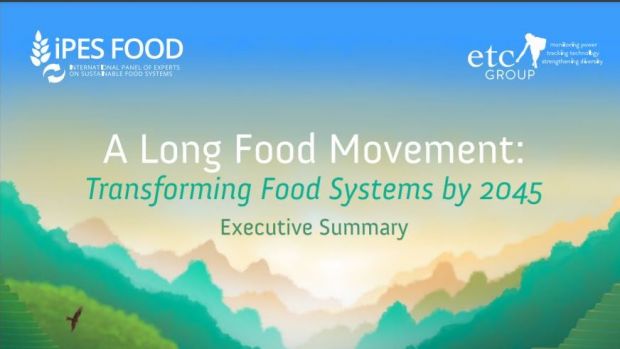 The authors map out two very different futures for food systems, people and the planet.

BELGIUM, Brussels. The International Panel of Experts on Sustainable Food Systems (IPES-Food) has released a new report in collaboration with the ETC Group: A Long Food Movement: Transforming Food Systems by 2045.

The authors map out two very different futures for food systems, people and the planet. First, what do the next 25 years have in store under “agribusiness-as-usual”? The keys of the food system are handed over to data platforms, private equity firms, and e-commerce giants, putting the food security of billions at the mercy of high-risk, AI-controlled farming systems, and accelerating environmental breakdown.

But what if the initiative is reclaimed by civil society and social movements - from grassroots organizations to international NGOs, from farmers' and fishers' groups to cooperatives and unions? The authors imagine what a 'Long Food Movement' could achieve by 2045 if these movements succeed in collaborating more closely – to transform financial flows, governance structures and food systems from the ground up.

The authors sum up: In 2021, those working to build food systems that are just, equitable, and operate within planetary boundaries have our work cut out for us. Climate change, biodiversity loss, and rapidly declining soil fertility are critically damaging the health of people and the planet, dislocating societies, and threatening food systems around the world. Five years into a global commitment to eliminate hunger by 2030, we have lost significant ground. In 2019, an estimated 690 million people were hungry and upwards of 2 billion lacked regular access to safe, nutritious, and sufficient food. This was before COVID-19 added approximately 130 million people to the world’s hungry, pushed uncounted millions more to the brink of hunger, and put one third of food and farming livelihoods at risk.

At the same time, the locus of power in food systems and the broader global economy is shifting at dizzying speed. In 2008, the world’s most powerful corporations drilled oil wells and traded stocks. Twelve years later, the world’s five corporate titans all deal in intangible data and have a market valuation that exceeds the GDP of entire continents. The new biodigital giants are now primed for the next step: unleashing big data and digital DNA into the world's pharmacies, food markets, and financial systems. ‘Multi-stakeholderism’ is everywhere as corporations – sensing the social and environmental tipping points ahead – seek to draw governments, scientists and a handful of civil society organizations into an artificial new multilateralism.

Against this backdrop, we consider what food systems could look like by 2045 if (agri)business-as-usual is allowed to run its course. We also imagine what could happen if, instead, the initiative is reclaimed by  civil  society  and  social  movements  –  from  grassroots  organizations  to  international  NGOs, from farmers’ and fishers’ groups, to cooperatives and unions. We consider what this ‘Long Food Movement’ could achieve if it succeeds in thinking decades ahead, collaborating across sectors, scales, and strategic differences, working with governments and pressuring them to act, and transforming financial flows, governance structures, and food systems from the ground up. 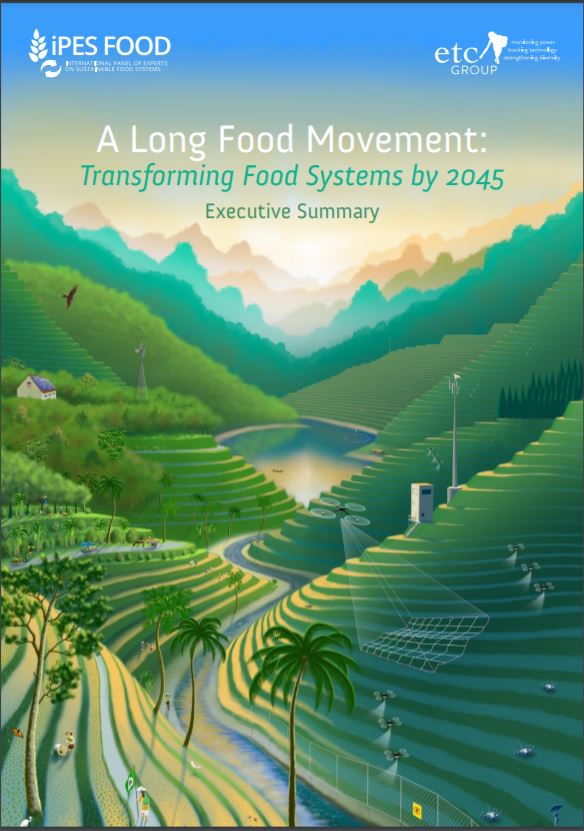 IPES-Food
Is it possible to transform financial flows, governance structures and food systems from the ground up?

Full report is available at www.ipes-food.org/pages/LongFoodMovement