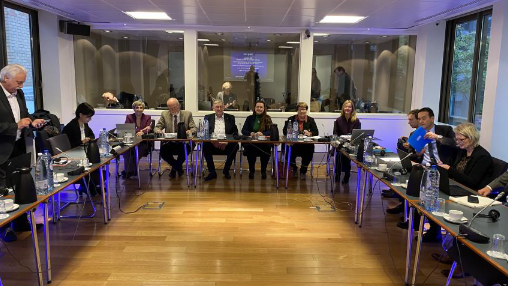 The national associations of the European butchers' trade met for their autumn conference in Brussels.

BRUSSELS European butchers' trade associations discuss the use of nitrite / nitrate and ways to improve sustainability.

The European butchers' trade associations have discussed the use of nitrite / nitrate and ways to improve sustainability. The members of the International Butchers' Confederation (IBC) considered the latest proposals of the European Commission, and also the national implementations of regulations at their autumn conference last week in Brussels.

The EU Commission's desire to impose massive restrictions on the use of nitrite and nitrate are causing great concern to butchers in several member states. Stricter rules would make it impossible to produce certain traditional products, or at least deprive them of their typical character – a fear also voiced by Vice President Eckhart Neun of the German Butchers' Association (DFV). The IBC members agreed on further courses of action at the European level and vis-à-vis their national ministries. One of the main resolutions was to persuade the national experts who will vote on the Commission's proposal to reject it and thus make way for new negotiations.

A significant amount of time was also devoted to the EU Commission's plans to increase its support for sustainable food production and processing in the future. These also include special labelling. The plans are to be finalised in the course of the next year. A new framework for national regulations will then take effect. For this purpose, a representative of the Brussels Commission was invited to sit in on the discussions as a guest and listen to the wishes – and above all the concerns – of the butchers' trade. The associations emphasised in particular how the craft enterprises have already undertaken a great deal, especially with regard to social and economic sustainability aspects.