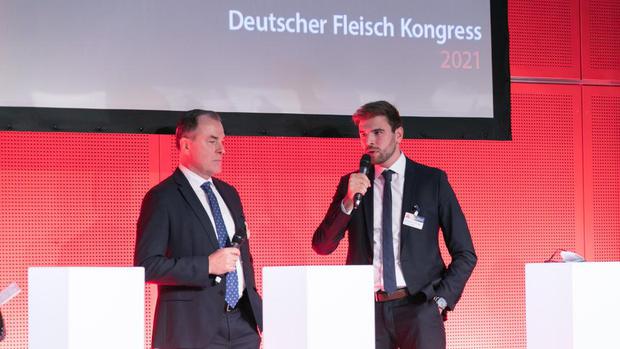 GERMANY, Mainz. Clemens and Maximilian Tönnies warn that the industry must speak with one voice and call on politicians to implement the Borchert concept quickly.

There is growing concern in the pig value chain that the concepts of the Borchert Commission will not be implemented with the necessary commitment by the new German government. At the German Meat Congress organised by afz - allgemeine fleischer zeitung and FLEISCHWIRTSCHAFT, Clemens Tönnies made an urgent appeal to the leaders of the SPD and Bündnis 90/Die Grünen parties not to "throw the Borchert concept overboard out of vanity". It must be prevented that the pig production is shifted abroad, Maximilian Tönnies added. That is why it is important to offer German pig farmers a perspective for the future.

Father Clemens and son Maximilian made it clear that the change in pig production was already taking place. In the meantime, 70% of the pigs slaughtered at Tönnies are produced in farming systems 2 to 4. Maximilian Tönnies reported that it was clearly communicated to the farmers that they should orientate themselves to the higher animal welfare standards when converting or building new stables. Nevertheless, the family-owned company from East Westphalia also offers a long-term purchase guarantee to fatteners who continue to produce in housing type 1. This was assured by Group CEO Clemens Tönnies.

The Tönnies family wants to provide answers to people who have reservations about meat consumption because of the issues of climate, animal welfare and health. One goal, he says, is to produce climate-neutral meat. Such a product, combined with a high level of animal welfare, is marketable worldwide. Maximilian Tönnies is convinced of this. The meat company plans to stop feeding soybeans grown on former rainforest and savannah land from the beginning of 2023. Clemens Tönnies also sees the use of natural fertilizers as a contribution to climate protection. After all, he says, this replaces mineral fertiliser, the production of which causes high levels of greenhouse gas emissions. Criteria for climate-neutral meat production would have to be developed for the entire industry. "If we don't tackle this now, we will be driven," warned Clemens Tönnies. He said it was necessary to speak with one language on this issue in the meat industry. Clemens Tönnies sees the industry communication of the poultry industry as a model. In the case of pigs, he says, it is unfortunately the case that "one does not even begrudge the other the poor balance sheet". This must change, "otherwise we will go down together", warned Clemens Tönnies. With the addition - "but we're the last to go" - the CEO provided a humorous conclusion to his appearance at the German Meat Congress.