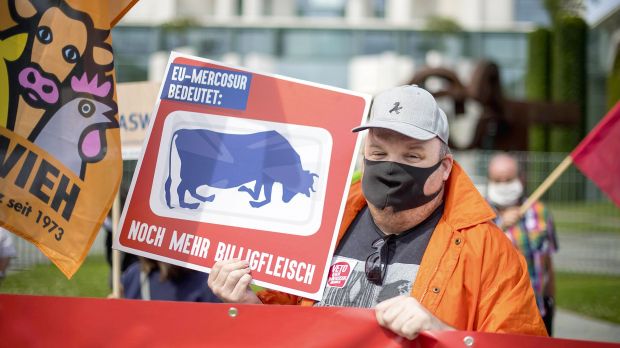 Criticism has accompanied the free trade agreement since the beginning of the negotiations. The fear: more imports of soya and meat into the EU, for the production of which the rainforest in the Amazon is cleared.

BELGIUM, Brussels. The EU Commission has presented the long-awaited impact assessment on the free trade agreement with the Mercosur countries. The Directorate General for Trade published the Sustainability Impact Assessment prepared by the London School of Economics (LSE) on its website. It stressed that the Union's agricultural economy would benefit from the free trade agreement on balance.

Annual imports of beef could increase

Total EU exports are expected to increase by 0.4 and 0.6 percent respectively, and imports from around the world by 0.9 and 1.1 percent. Beef supplies from Mercosur, however, would grow considerably more, by 30 or even 64 per cent; at the same time, EU production would shrink by 0.7 or 1.2 per cent. According to the impact assessment, European exports of dairy products would benefit considerably due to the reduction of the high import tariffs of the Mercosur countries.

Annual imports of beef from Mercosur to the EU could increase by about 60,000 tonnes and 128,000 tonnes respectively, according to the impact assessment. In this context, it is pointed out that the export commodity usually tends to be at the higher end of the quality spectrum and thus the impact would also be concentrated on these market segments. It is "likely", according to the LSE, that beef imports will expand less than expected on balance and that it is mainly the product currently imported at full duty that will benefit from the changes. The social impact of the agreement, according to the SIA, includes a decrease in employment in the European beef production sector of 0.7 and 1.3 per cent respectively.