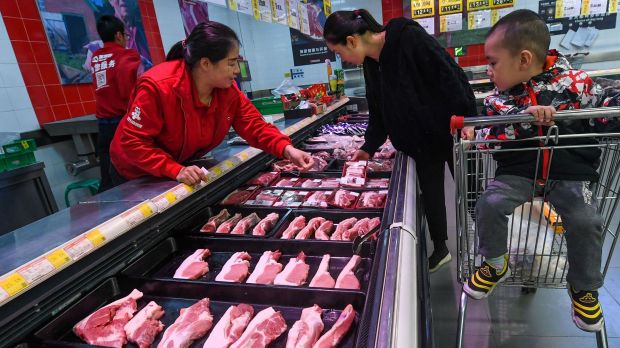 China's brisk imports of pork and poultry are leading to rising prices on the world market.

ITALY, Rome. World prices for major agricultural commodities continued to soar in March, rising for the tenth month in a row.

According to the Food and Agriculture Organisation of the United Nations (FAO), the price index it calculates climbed by 2.1 per cent to 118.5 points across all commodity groups compared to February, the highest monthly value since June 2014.

Once again, the FAO sub-index for vegetable oils in particular rose strongly, by eight per cent. Experts in Rome explained the increase in the price of palm oil by scarce stocks in important exporting countries and a recovery in import demand. Soya oil prices had risen significantly due to the expected brisk demand from biodiesel producers. Rapeseed and sunflower oil prices were supported by tighter supplies from Canada and the Black Sea region, respectively.

Meanwhile, the milk price index increased by 3.9 per cent. According to experts in Rome, quotations for butter rose in response to the tight supply in Europe. Milk powder became more expensive, mainly due to increasing imports from China. In contrast, cheese quotations fell again due to demand.

The FAO price index for meat rose by 2.3 per cent in the month under review compared to February 2021; the level of the same month last year was missed by only 0.5 per cent. Pork and poultry prices were the main beneficiaries of the upward trend, which was also largely attributed to buoyant imports from China. While beef prices moved sideways, sheepmeat became cheaper due to increasing supplies from New Zealand.

Meanwhile, the cereal price index lost 1.7 per cent in March compared to February; the level of the same month last year was nevertheless surpassed by a strong 26.5 per cent. According to Rome experts, wheat in particular fell in price, driven by ample supplies and good harvest prospects for 2021.

The FAO sub-index for sugar also moved down, by 4 per cent. However, the previous year's level was still exceeded by more than 30 per cent. The price reduction was mainly justified by speculation about possibly large sugar exports by India.