Cooperation: Acting before the next pandemic
Cooperation

Acting before the next pandemic 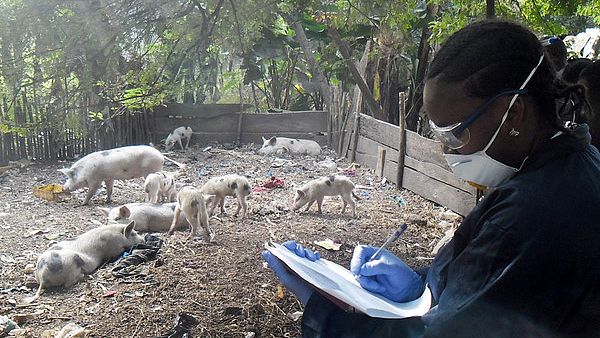 Pigs in Sierra Leone being sampled as part of a project on Ebola.

GERMANY, Insel Riems. The President of the Friedrich-Loeffler-Institute (FLI), Prof. Dr. Dr. h. c. Thomas C. Mettenleiter, and Prof. Dr. Wanda Markotter, Head of the Centre for Viral Zoonoses at the University of Pretoria, South Africa, were appointed as the founding Co-chairs of the new international One Health expert panel.


The One Health High Level Expert Panel (OHHLEP) of 26 members was officially launched on 20 May. The World Health Organisation (WHO), the World Organisation for Animal Health (OIE), the Food and Agriculture Organisation of the United Nations (FAO) and the United Nations Environment Programme (UNEP) had called for applications for the panel.  It will provide scientific advice to the four partner organisations at the interface of human, animal and environmental health.

„The Covid-19 pandemic has once again highlighted how closely linked human, animal and environmental health is and therefore the importance of the 'One Health' approach to global health. “
Biologist and virologist Thomas C. Mettenleiter

The focus is on the interactions between humans, animals and ecosystems and the early recognition of future threats to health. In addition, factors that influence the spread of pathogens from animals to humans are to be identified. The goal is to develop a global agenda to reduce the risk of pandemics.

The constituent assembly of the OHHLEP took place virtually on 17 and 18 May. Here it was decided to set up four working groups that will deal with the implementation of 'One Health' approaches, comprehensive networking of existing and planned activities, surveillance, early detection and prevention of zoonotic infections, and identification and risk assessment of influencing factors.  'If we take this approach as a basis, we will not only achieve short-term changes, but a sustainable improvement that includes biodiversity, climate change, food security and social inequality. The goal is a healthy environment for all, ' added virologist and bat expert Wanda Markotter.

The four founding partners demanded impartiality and independence in addition to professional expertise for a successful appointment. In order to cover as many aspects of the complex field of 'One Health' as possible, different areas of expertise were addressed in the call for proposals. In addition to zoonoses (infectious diseases transmissible between humans and animals), biodiversity, epidemiology and public health, these also included social welfare and economics, informatics and modelling as well as climate and environment. In selecting the 26 members from over 700 applications by the founding partners, expertise was considered as well as geographical distribution and gender balance. The OHHLEP experts were appointed for an initial period of two years, with the possibility of reappointment.