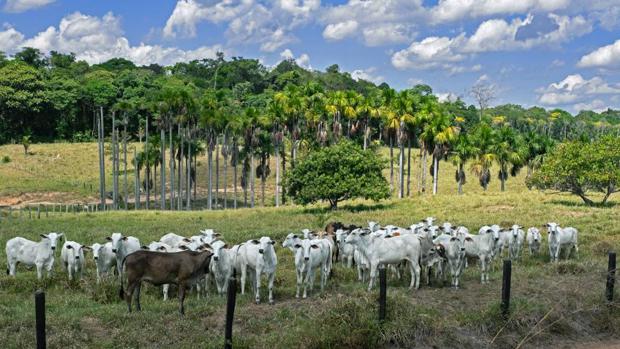 The meat in the boycotted products is said to come from cattle raised on Brazilian farms embargoed for illegal deforestation in the Amazon (symbol photo).

GERMANY, Frankfurt. Several European retailers - including Lidl, Carrefour, Sainsbury's and Albert Heijn - have pledged to stop selling beef from South America from 2022. They are protesting against the deforestation of the rainforest in Brazil.

Six European retail giants plan to stop selling Brazilian beef products next year. The reason given is the link between meat production and the illegal destruction of the Amazon rainforest. The companies include the Ahold Delhaize group with its Delhaize and Albert Heijn brands, Lidl Netherlands, Carrefour Belgium, the French Auchan group and the British supermarket chain Sainsbury's. The commitments vary from company to company. For example, Lidl and Albert Heijn will no longer sell meat from South America from 2022, Delhaize and Carrefour Belgium will not stock salty snacks and other products under the Jack Link brand, while Sainsbury's will stop sourcing corned beef from Brazil.

The boycotts come after research by Repórter Brasil and environmental organisation Mighty Earth tracked the path of so-called "dirty" slaughterhouses linked to deforestation to supermarket shelves in Europe. The findings were presented to retailers in advance, Mighty Earth said in a statement. This led to the announcements, it said. Most of the boycotted products are linked to Brazilian corporation JBS, the world's largest meat processor. For example, the researchers found several examples of "beef laundering." This is beef processed by JBS in its slaughterhouses in areas with low deforestation. But the meat comes from cattle raised on farms that are officially sanctioned and embargoed for illegal deforestation in the Amazon.

The meat giant, however, vehemently defends its position: "JBS does not condone deforestation, forced labor, abuse of conservation areas or violations of environmental embargoes," a company spokesman told Reuters news agency. In addition, only five of its 77,000 direct suppliers were mentioned in the investigation. A challenge for the entire industry, on the other hand, is the monitoring of indirect suppliers who supply the end supplier, he said. To ensure this, JBS plans to establish a monitoring system by 2025.

Deforestation in the Brazilian Amazon, the world's largest tropical rainforest, has increased sharply since President Jair Bolsonaro took office in 2019. Scientists estimate that two-thirds of cleared land in the Amazon and the Cerrado savanna region has been converted into cattle pastures, according to Mighty Earth. Nico Muzi, Mighty Earth Europe director calls the initiative by commercial companies "concrete commercial action," countering rainforest deforestation.