Zandbergen: Distributor of Beyond Meat in Eur...
Zandbergen

Distributor of Beyond Meat in Europe

From Editor fleischwirtschaft.com
Thursday, May 03, 2018 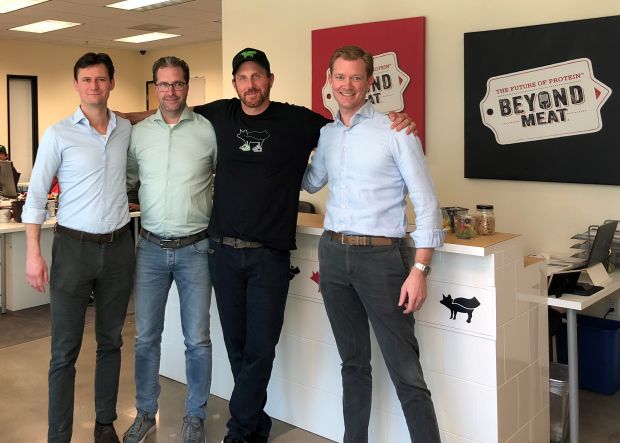 The delegation of Zandbergen World’s Finest Meat together with Beyond Meat founder and CEO Ethan Brown, during their site visit at Beyond Meat’s headquarters in Los Angeles, California, celebrating their partnership.

THE NETHERLANDS, Zoeterwoude. As one of the largest European meat importers and a producer of high-quality meat products, Zandbergen World’s Finest Meat will represent Beyond Meat in Europe.


The California-based start-up is widely recognized as one of the plant-based meat category leaders, and after explosive growth in the US market, is expanding to Europe. Zandbergen will begin offering Beyond Meat’s flagship Beyond Burger to food service customers throughout Europe, except Germany and The UK, from July onwards. The Beyond Burger is the first plant-based burger that looks, cooks and satisfies so much like beef, which it is sold in the meat case in US based grocery stores.

“The European market represents a significant opportunity for Beyond Meat and we are thrilled to be partnering with one of Europe’s leading meat distributors to enter the market,” said Beyond Meat CEO and founder Ethan Brown.

“As a family owned company we think about the long-term relationship we want to build with our consumers. If we want to maintain our leading role in the meat industry, we feel the need to anticipate the changing behavior of consumers,” Joris Zandbergen explained. “For the future we see ourselves as a supplier fulfilling our customer’s protein needs, rather than being a meat supplier solely.”

Adriaan Figee, CCO of Zandbergen World’s Finest Meat added: “In Beyond Meat we’ve found an innovative partner, whose products are revolutionary. For consumers who are looking for more diverse protein options, Beyond Meat is the answer. We strongly believe in their products. As these products look and taste similar to beef, it’s a really good option for flexitarians too.”

Beyond Meat, which counts Bill Gates, Leonardo DiCaprio and multinational Tyson Foods among its investors, is working to change the meat we eat by replacing animal protein with plant-based proteins. By addressing the protein at the center of the plate, Beyond Meat aims to positively impact four growing global concerns: human health, the environment, natural resources and animal welfare. Beyond Meat’s portfolio of products is already available at more than 27,000 grocery stores and restaurants in the US, as well as in Hong Kong and Australia.