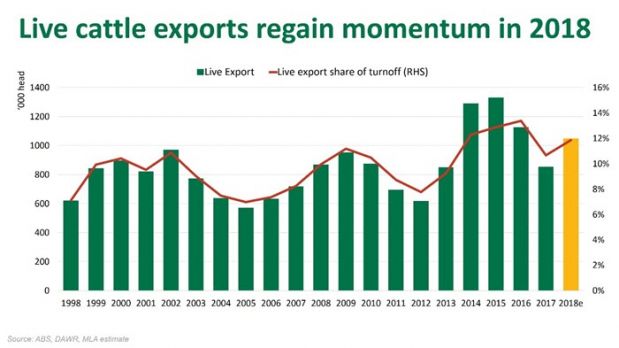 Live cattle exports made up ground throughout 2018.

AUSTRALIA, North Sydney. Live cattle exports made up ground throughout 2018, underpinned by a reasonable 2017–18 northern wet season and a more favourable price point supporting an uptick in shipments to Indonesia and Vietnam.

The emergence of China as an importer of slaughter cattle, three large shipments of feeder cattle to Russia and strong numbers shipped to Israel also buoyed the live cattle trade in 2018. For the calendar year-to-November, exports totalled 1,008,000 head, up 27% year-on-year.

Steady demand from Indonesia and Vietnam has also supported live trade up 27%, 27% and 56% year-on-year respectively.

The establishment of slaughter cattle exports to China, combined with a lift in breeder cattle shipments this year, has seen the live trade to the market increase 62% year-on-year, to 99,000 head.