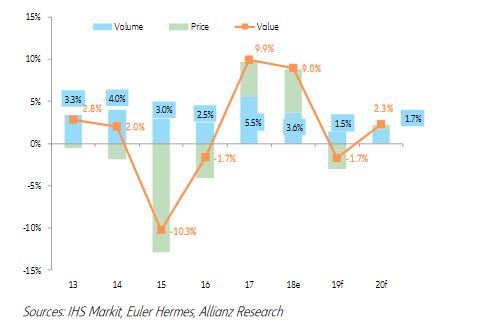 Global trade of goods and services, growth in volume and value (%, y/y)


On top of decelerating global growth (+2.5% in 2019, after +3.1% in 2018), 2 percent points over two years (2019 and 2020) can be directly attributed to high uncertainty according to experts at Euler Hermes. However, the depth of the slowdown will be stronger in countries where services depend more on manufacturing. For example, in Germany, 26% of total national services inputs are used as inputs in industry, against 16% in France, 14% in the US or 11% in the UK.

In value terms, trade could have contracted -1.7% in 2019, due to a negative price effect, as illustrated by the drop in commodity prices. Globally, exporters lost $420 bn. in 2019.

Trade war on the horizon

The worst could be behind the market, the experts assume, but despite a slight acceleration they expect global trade to remain in this low-growth regime in 2020 (+1.7%), and their scenario of a Trade Feud. A superficial “mini-deal” between the US and China, a slowdown in trade in services and a busy political year in 2020 leave no hope for sizable improvement.

Trade diversion shows that a few winners are capturing export market share to the US (Vietnam, France, the Netherlands and Taiwan) and China (Malaysia, Singapore, Russia and Saudi Arabia). However, these winners could be next on the hit-list.

Meanwhile, phantom trade, whereby companies ship their merchandise to a third market (such as Taiwan, Japan) before exporting it to their trade partner, is unveiling tariff circumvention mechanisms and artificially inflating trade figures.

Pervasive protectionism (~1,290 new trade barriers in 2019, number of new regional trade agreements divided by three and average US tariffs more than doubled since 2017) has pushed countries to sharpen their trade arsenals. The experts identify countries that are irritable (i.e. could be tempted) and capable to wage trade wars (the US, India, Russia, China, France); those that are irritable but not equipped (Japan, Mexico, South Africa) and those that are neither equipped nor irritable (Australia, South Korea).

Last, they expect new rules of the game, as part of the shift towards more sustainable trade (regulation of trade transportation and carbon emissions of traded products). Simplifying and considering the EU Border Carbon Adjustment tax (BCA) to be an outright tariff on EU imports, they estimate that a 1% tariff could result in a loss of $7 bn. of exports to the EU, affecting Russian, US and Chinese exports.