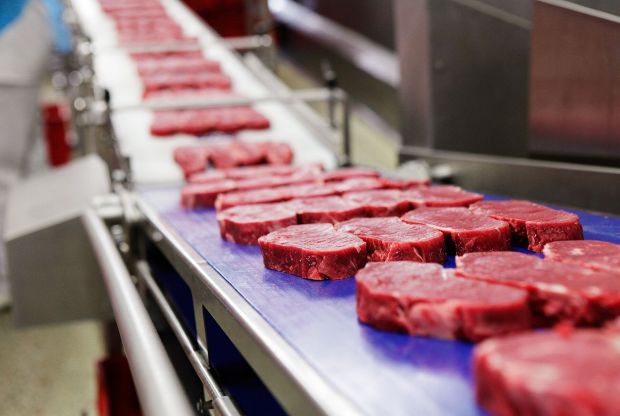 
These positive results were announced by the members of the Executive Board Carsten Schruck, Steen Sönnichsen and Johannes Steinhoff at Westfleisch SCE´s General Assembly. The Managing Board led through the event in this three-member constellation for the first time. Sönnichsen, responsible for production and sales of fresh meat, just started at Westfleisch in December 2017.

“The decline of meat production is a nation-wide trend. Bucking this trend, Westfleisch was able to increase its sales and slaughter volume and achieve satisfactory results“, stated CFO Schruck. He announced that the group will pay a dividend of 4.2 % to shareholders plus special bonuses in the amount of €3 mill. for agricultural members.

“Our subsidiaries WestfalenLand and Gustoland performed great once again strengthened their role as sales drivers within the group. In the range of `MAP-products and meat based convenience’ and `fresh meat‘ we could strengthen our position in the market“, Johannes Steinhoff added. His executive portfolio mainly is `product processing´.

Westfleisch sold about 44% of its meat and meat products abroad. The target markets include the European states as well as overseas markets. But there were differences compared to the previous year: After the `Asia-Boom´ – above toward the PR of China – the demand in third countries decreased by 4.8%. On the other hand the exports to the EU-markets have risen significantly up to 10.5% and could partially compensate the losses.

“In 2017, one and a half year after the major fire at the site in Paderborn, the claim settlement could be finalized”, Schruck reported. “We will invest the insurance payments to modernize and develop the operating Westfleisch sites.” Sönnichsen added: “We’ll make sure that our company remains internationally competitive. With these investments, we secure the future of our cooperative.”

“In celebrating our jubilee in 2018 we look back on 90 exciting and successfully years“, Dirk Niederstucke, the Chairman of the board, pointed out. “Westfleisch developed well through the years and is now a healthy and very solid European Cooperative. At this time, we expressly want to thank our employees for their commitment and performance which have made this good operating business possible in the first place“, stated Niederstucke.

“The aim is to raise the awareness for animal welfare matters even more and to further enhance the protection of livestock”, Sönnichsen said. “We currently offer advisory services and training courses for our agricultural members in regard to `transportability‘ as well as `emergency killing of livestock‘.” By the end of 2018 over 500 participants will be informed.

Westfleisch is the No. 3 meat marketer in Germany and ranks amongst the Top 5 in Europe. The international company, based in Münster, slaughters, cuts, processes and refines meat. In 2017 the company sold 980,000 t of meat and generated turnovers of €2.75 bn. Westfleisch is owned by about 4,300 farmers in North West Germany and the Netherlands. On the basis of cooperation contract, they breed pigs, cattle and calves. Westfleisch has approximately 5,000 employees.