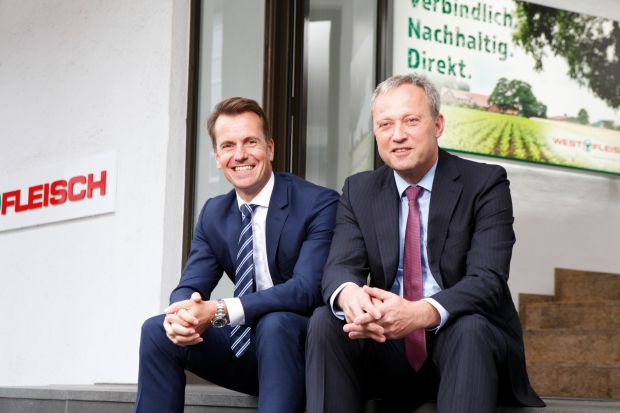 Carsten Schruck and Johannes Steinhoff are members of the Executive Board of Westfleisch SCE.


“Our company posted good net income in 2016. We slaughtered over 8 mill. pigs for the first time in the company's history," said Executive Board Member Carsten Schruck at the Westfleisch General Assembly in Münster.

Despite the loss of more than 20% of production capacity in the fire at the Paderborn site in April 2016, the market shares have in some cases now even been exceeded, reported Westfleisch. Thus, sales of pork rose by 8.1% to roughly 639,000 t and beef by 2.8% to 106,000 t. Once again the export market played an important role, with 43% of the products being sold outside Germany.

"These are good results that give us a tailwind for the current year and beyond," said Schruck. The second Executive Board Member, Johannes Steinhoff, announced further investment in the current fiscal year, aimed at expanding the pig slaughtering capacity at the Coesfeld and Oer-Erkenschwick plants. The opening of the new beef cutting plant in May this year consolidated the position of the Westfleisch site in Lübbecke as one of the largest and most modern slaughterhouse and cutting plants for livestock in Europe, explained Steinhoff.

In addition, the work on doubling the size of the dispatch warehouse at the processing subsidiary WestfalenLand was successfully completed in March. Westfleisch will pay a dividend of 2.5% on credit balance deposits as well as a tiered special bonus for different meat types for 2016. These payments had to be cancelled in the loss year of 2015.