The Congress opened its doors 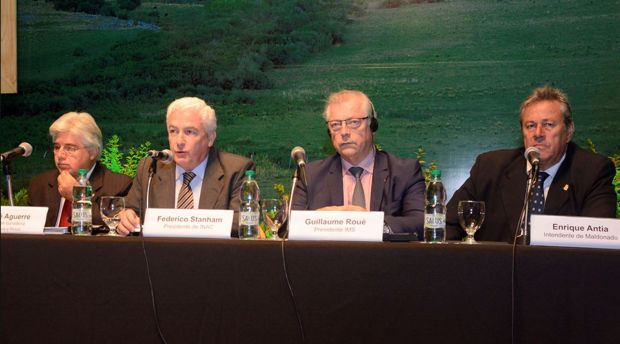 The 21st World Meat Congress was inaugurated with the presence of the Minister of Livestock Tabaré Aguerre, the President of INAC Federico Stanham, the President of the International Meat Secretariat (IMS) Guillaue Roué, and the Mayor of Maldonado Enrique Antía.

URUGUAY, Punta del Este. With an overflowing room, the 21st World Meat Congress was inaugurated with the presence of the Minister of Livestock Tabaré Aguerre, the President of the International Meat Secretariat (IMS) Guillaue Roué, the President of INAC Federico Stanham and the Mayor of Maldonado Enrique Antía.


Some 700 people participated in the first activities of this event, which is being hosted by Punta del Este, Uruguay, for the first time.

The Minister began his speech by highlighting the book given to Congress attendees, written by Lucia Lewowicz of Universidad de la República Uruguay (University of the Republic Uruguay – UDELAR) that tells the story of Liebig’s Extract of Meat Company (Lemco) in Fray Bentos. Development and innovation was already present in the country, stated the Secretary of State.

Aguerre said that Uruguay’s state policy on livestock is based on public assets such as health, safety and traceability. He added that the past has to be honored, the present has to be challenged and the future has to be built, referring to a phrase that has been coined at the Instituto Nacional de Carnes Uruguay (The National Meat Institute of Uruguay – INAC).

Regarding the threats of the global meat complex, in his speech Aguerre insisted on the need to defend the positioning based on scientific reports. In Uruguay, work is being done in this direction to become more sustainable. This is an inter-institutional work with a planning document up to 2030, Aguerre said.