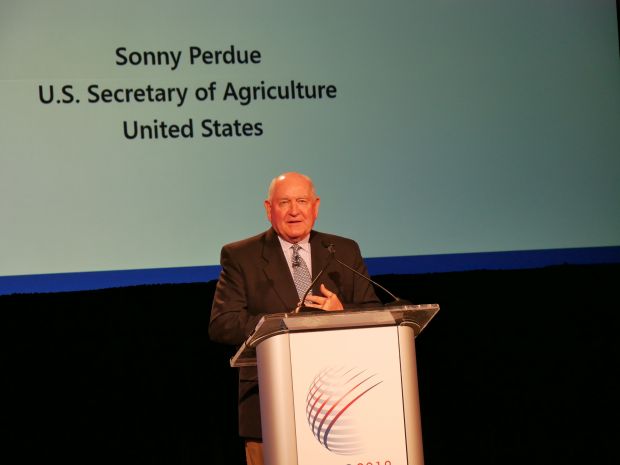 USA, Texas, Dallas. Nearly at the same time that Sonny Perdue, U.S. Secretary of Agriculture, spoke at the World Meat Congress (WMC) of the importance of free trade, President Trump imposes steel and aluminum tariffs on the European Union, Canada and Mexico. The next speakers from the European Union and Mexico, who spoke in the session after Perdue at WMC part “Outlook for the global trading system”, were deeply disappointed about Trumps decision.


Perdue pointed in his speech in front of 750 meat experts from all over the world on productivity in US meat sector, helping developing countries to become developed countries, science based progress in farming and the relevance of a free an open trade for the agricultural sector. So did the other two ministers Lawrence MacAulay, Minister of Agriculture and Agri-Food, Canada, and Luis Etchevehere, Minister of Agro-Industry, Argentina.

Hosted by the International Meat Secretariat and U.S. Meat Export Federation, the 2018 World Meat Congress  is yet held in Dallas, Texas, from May 30 to June 1. This is the world’s premier gathering of beef, pork, lamb and veal industry leaders—including producers, exporters, marketing specialists, policy analysts, economists and meat scientists—coming together to exchange ideas and experiences on key issues affecting the international meat and livestock sector, as well as global trade.