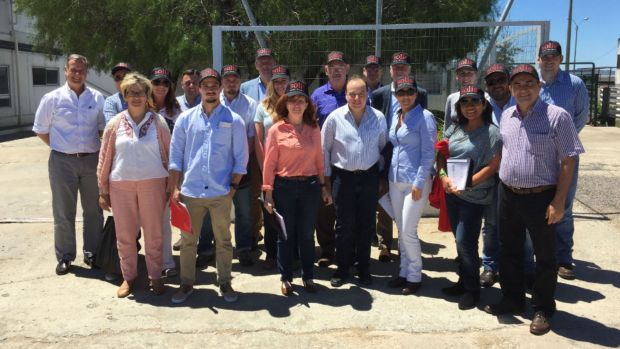 URUGUAY, Punta del Este. In the framework of the World Meat Congress, after the closing of the different WMC sessions, many attendees took the opportunity to learn more about meat processing in Uruguay by taking part at four technical tours.


Tour 1 took the attendees to “Matadero Solís”, to visit the plant located on Route Nº 8, km 87, in a town named “Solís de Mataojo”, Department of Lavalleja. “Matadero Solís” is a slaughter and deboning plant for cattle and sheep, designed and equipped with cutting-edge technology in order to meet the requirements of the most demanding markets.

It began operations on 18 April 1995. At present it slaughters 60 cattle head per hour and has more than 300 employees. It has chilling chambers with a capacity of 450 cattle a day and a deboning room with a capacity of 120 quarters per hour. On site, the attendees were able to see these processes as well as end products, for both domestic and foreign markets.

Tour 2 headed to an area known as the “Sierra de los Caracoles”, a place where streams are descending from hills and running through meadows, which creates a unique and enjoyable environment. There, they visited a farm named “Sierra de los Caracoles”. It runs for 1,075 hectares, and it is a well-respected agricultural establishment. Hereford cattle is both born and raised there, and the farm has about 1,000 head including breeding cows, replacement female cattle, bulls and bullocks. The farm is a purveyor of bulls (both pedigree and purebreds), bullocks, cows and fat heifers.

Cattle roams in natural pastures and meadows, and winter supplementation relies on bales and wet sorghum grain, which are all self-produced. During the journey, the visitors were able to appreciate different breeds of cattle, and the way in which Uruguayan farmhands work, mounting creole horses.

Tour 3 headed to “Frigorífico San Jacinto”, which produces and commercializes both ovine and bovine meat products and all its by-products, in compliance with the highest safety and quality values.

The company permanently introduces new technology into its processes, and a clear effort is made to consolidate a steady work group along with its producers and suppliers. It has been in business for over 50 years, and it has always complied with all legal and health requirements by law, and maintained a harmonic relationship with the surroundings, looking after the wellbeing of animals and the environment.

Over 800 people work at “Frigorífico San Jacinto”, and either 1,000 cattle or 4,200 sheep can be produced on a single shift.  The company’s brands are “Nirea”, “Nirea Premium Lamb” and “El Rancho”. The visitors became acquainted with the company’s own system of natural wetlands, used for the treatment of effluents.

Tour 4 took the visitors to the livestock farm known as “Las Rosas”, which from 1973 to the present day is managed by Princess Laetitia D’Arenberg. She is responsible for developing and intensifying full cycle livestock production by making significant investments in pastures, machinery and infrastructure for its whole line of products: meat, milk, wool and genetics. Sheds were built for meat breeds such as Hereford and Aberdeen Angus (both red and black), along with sheds for daily breeds such as Jersey and Holando. Arab and creole equines are part of the genetic project of Las Rosas. And sheep selected during three technical tours through Oceania have enabled Las Rosas to offer the best genetics on Superfine Merino, Poll Dorset and Ile de France.