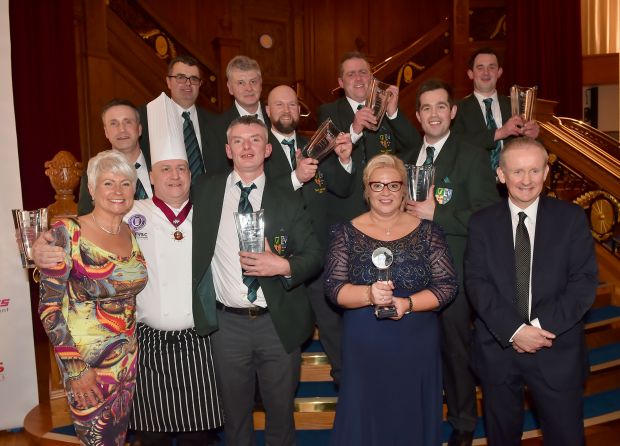 NORTHERN IRELAND, Belfast. In a contest to see who would be crowned as the world’s top butchers, Team Ireland, with butchers from Northern Ireland and Ireland competing, have been named the best in the world at the 2018 World Butchers’ Challenge.


Following an outstanding display of butchery skills and creativity, the home nation, Team Ireland, was announced at a Gala event in Titanic Belfast.

Each team of six had just three hours and fifteen minutes to turn a side of beef, a side of pork, a whole lamb and five chickens into a themed display of value-added cuts, similar of what you would expect in a traditional butcher shop or supermarket but with plenty of innovation and skill at the heart of the displays.

Team Captain Garrett Landers says this win will add to Ireland and Northern Ireland’s reputation for the quality of its meat and craftsmanship, delivering additional promotion for the entire Island of Ireland on the global stage. “We have been training for the World Butchers’ Challenge for almost 18 months, and to win on our first attempt is just incredible. The standard from the other countries was first-class, and we’re are beyond delighted to have won the award, here in Belfast – the first time that the World Butchers’ Challenge has ever been held here.” He added: “We’re hoping that this accolade will help to spread the word of the world-class quality of Irish and Northern Irish produce across the globe.”

Six butchers from all of the teams were named as the World Team. These are Eamon Etherson from Ireland (Portrush), Angel Naidener from Bulgaria, Adam Stratton from Australia, Corey Winder from New Zealand, Francesca Camassa, Italy and Phillipe Lalanda from France.

The World Butchers’ Challenge aims to showcase skill and innovation in the butchery trade and as such a number of other accolades were awarded this evening: