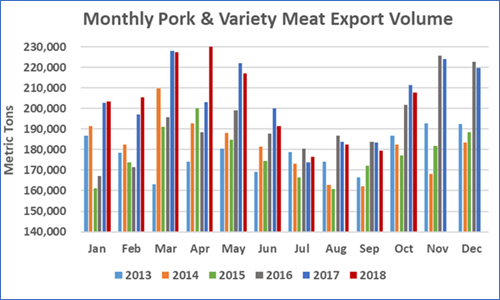 October pork exports trended seasonally higher compared to recent months but were still below the results posted in October 2017.

USA, Washington. US beef exports remained on a record-shattering value pace in October, according to data released by USDA and compiled by USMEF. October pork exports trended seasonally higher compared to recent months but were still below the results posted in October 2017.

The upcoming trade negotiations with Japan are critical for the US pork and beef industries, as all major competitors in the Japanese market will soon benefit from significant tariff reductions.

New value records for US beef in Korea, Taiwan and the Philippines

New record for US pork in Korea, growth in Japan

October pork exports to leading value market Japan totaled 35,134 t, up 8% from a year ago, while export value climbed 9%to $146.6 mill. This pushed January-October exports 2% ahead of last year’s pace in volume (330,480 t) and 3% higher in value ($1.36 bn). This included a slight decrease in chilled pork volume (176,118 t) while value was up 2% to $849 mill. U.S. share of Japan’s pork imports held close to 35%, down slightly from last year. But Japan imported a record volume of ground seasoned pork from the European Union in October and US share in that category has dropped from 71 to 65% in 2018. Unfortunately this trend is likely to continue with upcoming implementation of the Japan-EU Economic Partnership Agreement and the Comprehensive and Progressive Agreement for Trans-Pacific Partnership, which will reduce tariffs on all pork and phase the import duty on ground seasoned pork to zero over the next six years.