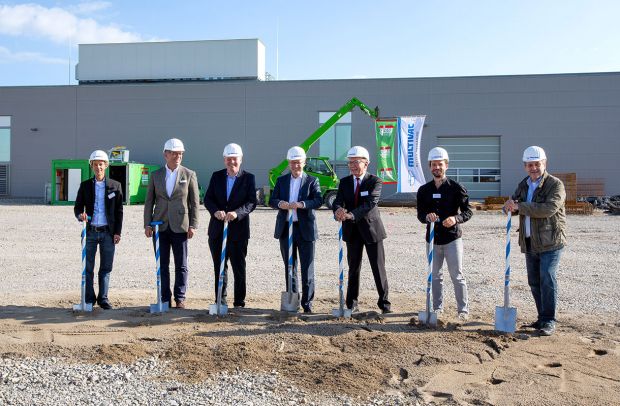 As part of an official ceremony, the Directors of Multivac Hans-Joachim Boekstegers (CEO), Guido Spix (CTO and COO) and Christian Traumann (CFO) turned the first spadeful of earth for the construction of a new building complex in Wolfertschwenden.

GERMANY, Wolfertschwenden. As part of an official ceremony, the Directors of Multivac Hans-Joachim Boekstegers (CEO), Guido Spix (CTO and COO) and Christian Traumann (CFO) turned the first spadeful of earth for the construction of a new building complex in Wolfertschwenden.


It is intended primarily for the new Slicer Business Unit. The floor space of more than 17,000 square metres will also create 180 high-quality office workstations as well as conference and function rooms, which will be capable of being used very flexibly. The investment amounts to around € 35 mill. Completion is planned for 2020.

The production space on the ground floor of the new Building 16 will be around 7,500 square metres. Building 17 will house the new Slicer Application Center as well as a reception area and an additional company restaurant, which will extend over two floors. In addition to this, a total of 180 high-quality office workstations will be created on the third floor, while versatile conference and function rooms will be housed on the top floor.

In the Application Center the range of services on offer for slicers will be similar to those in the existing Training and Innovation Center (TIC), namely sample production and machine demonstrations as well as a wide range of training programs for the slicers and slicer lines.

The Group has approximately 5,600 employees worldwide, with some 2,100 based at its headquarters in Wolfertschwenden. The production site in the Allgäu region of Germany currently comprises more than 72,000 square metres in total. In the early part of 2018 new production areas for the Traysealer Business Unit were completed, as well as additional office space for the Control Technology department, covering a total of around 4,000 square metres.