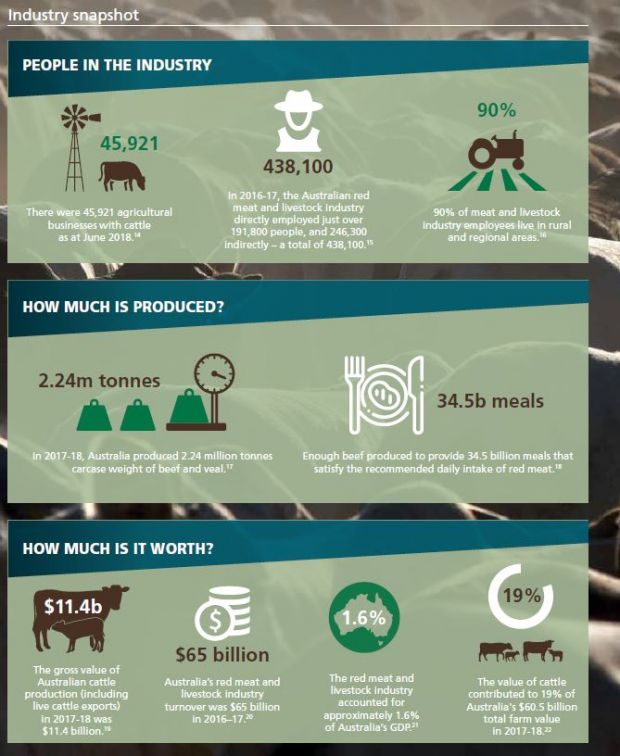 A new report card into the sustainability of the Australian beef industry, from paddock to plate, shows it is proactively improving its care of the environment, animals and people.

AUSTRALIA, Barton. The 2019 Australian Beef Sustainability Annual Update reports the contribution cattle producers make by sustainably managing almost half of the Australian landscape and the significant contribution the sector has made to the national emissions profile and health of regional and rural communities.


Launched in 2017, the Australian Beef Sustainability Framework was developed by the Australian beef industry in collaboration with stakeholders to meet the changing expectations of consumers, customers, investors and other stakeholders. The Framework defines sustainable beef production and tracks performance over a series of indicators, to promote the industry’s longevity and prosperity.

Highlights include the industry more than halving its carbon footprint since the Paris Agreement’s baseline year of 2005, demonstrating the ambition to be net carbon neutral by 2030 is on track. The Australian beef industry has reduced absolute emissions by 55.7%, from 2005 to 2016, the most recent reporting period, largely through increasing productivity and landscape management.

Report Highlights:
Animal welfare
• More producers are using pain relief on their cattle, since it became commercially available in recent years. An estimated 15% of the national cattle herd are now treated with pain relief for routine, necessary husbandry practices. This is an increase of 11% on last year;
• Vaccination rates against clostridial diseases are up to 82% of the national cattle herd, up from 71% last year; and
• 86% of Australian cattle are polled (i.e.: don’t have horns), reducing safety concerns and removing the need to de-horn animals.

Economic resilience
• A National Livestock Genetics Consortium was established to deliver improvements worth more than $400; and
• Beef farms saw a 1% increase on their rate of return in 2017-18 compared to the previous year.

Environmental stewardship
• There was a 56% reduction in the beef industry’s absolute greenhouse gas (i.e. carbon dioxide equivalent) emission from the Paris baseline year of 2005 to the latest reporting period of 2016, largely through a focus on improving productivity and landscape management practices;
• The amount of land with coverage from trees and shrubs, including remanent and regrowth increased by 1.1% between 2016 to 2017 and 1.3% from 2008-17 in beef producing areas; and
• 52% of cattle-producing land is managed by beef producers for environmental outcomes through active management.

People and the community
• 39% of feedlots audited voluntarily implemented an antimicrobial stewardship plan in the first year of the guidelines’ release; and
• Launched the Rural Safety and Health Alliance to invest in work, health and safety solutions.