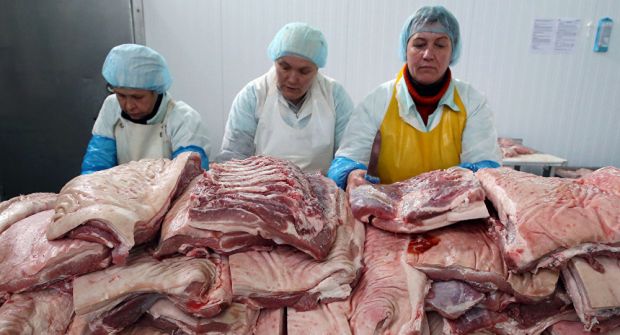 UKRAINE, Kiew. Ukraine produced 1,637 mill. t of meat in the first nine months of 2017, reporting an increase of 0.2% compared to the similar period from the previous year, according to the data from Economic Discussion Club cited by ProAgro.


By meat type, between January and September 2017, Ukraine reported 0.1% increase in beef production, 1.4% in poultry production, and 1.6% in pork, compared to the similar period in 2016.

Furthermore, in the period stated, Ukraine's meat and meat products exports increased by 23% compared to the first nine months of 2016, reaching 268,000 t. Whilst, the meat imports rose by 22% in the same period, reaching 156,000 t, ProAgro reported.

Poultry meat shipments from Ukraine accounted for 79% of the country's total meat exports, namely 212,000 t of poultry meat were exported, an increase of 19% compared to January–September 2016. The increase in poultry exports was based on the strong demand reported in Egypt, the Netherlands, and Iraq.

The demand for Ukrainian beef and pork was also high and the trend continues. Countries such as Belarus, Azerbaijan, Kazakhstan, Georgia and Moldova, import the largest volumes of beef and pork from Ukraine. Between January and July 2017, the beef exports from Ukraine reached 42,000 t, which represented 20% of the country's production.

Regarding the country's imports, which are mainly represented by pork and poultry meat, most meat products were imported from Poland and Germany. The share of imports in domestic food consumption in January–September 2017 was 10%.