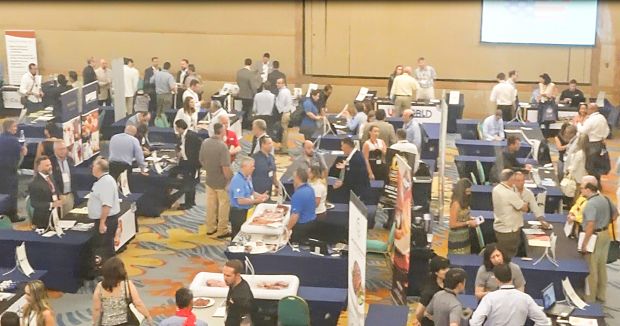 
This year’s event was the largest to date, with 56 exporting companies welcoming about 140 meat buyers from 18 countries throughout Central America, South America and the Caribbean. The showcase was conducted with funding support from the Nebraska Beef Council, the Beef Checkoff Program and the Pork Checkoff.

Importers from Brazil attended the showcase for the first time, with Brazil having opened to US beef earlier this year. Buyers from Ecuador returned to the event this year, as Ecuador recently eliminated temporary import duties that had made it a difficult market for US exporters to serve.

Dawn Caldwell, a cattle producer who serves on the Nebraska Beef Council and as vice chair of the Federation of State Beef Councils, attended the showcase for the first time. She noted that the experience confirmed the Nebraska Beef Council’s decision to help fund the Latin American Product Showcase when it was first launched in 2011. Missouri pork producer Everett Forkner represented the National Pork Board at the showcase, and expressed positive feelings about the return on investment it provides for the US pork industry.

In addition to the main showcase and ample networking opportunities for both buyers and exporters, the event also included educational seminars. Representatives of Midan Marketing, a Chicago-based firm that services meat industry clients, shared insights designed to help businesses in the Latin American region successfully merchandise more US red meat.

Buyers and exporters also had an opportunity to tour the Port of Cartagena, one of Colombia’s busiest ports. Several participants in the tour were impressed with the advances in automation at the port and other methods being used to move cargo quickly and efficiently.

The Latin American region is a destination of increasing importance for US red meat. Last year the region accounted for nearly 180,000 t of US pork exports, valued at $438 mill. US beef exports in 2016 totaled about 59,000 t valued at $332 mill.