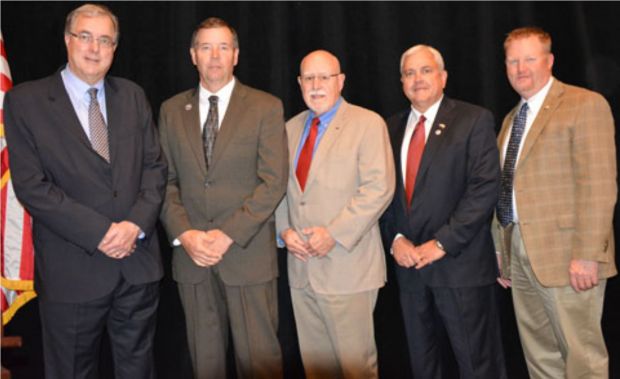 
USMEF chairman for 2016–2017 is Bruce Schmoll, a soybean and corn producer from Claremont, Minnesota, where he lives with his wife, Tarrie. Schmoll is a past president of the Minnesota Soybean Growers Association and for several years has represented the oilseed producing sector on the USMEF Executive Committee.

Schmoll has also served on his county planning and zoning board and on a township board of supervisors. He drew on that experience when addressing USMEF members, reminding them of the opposition and obstacles livestock producers often face when attempting to locate or expand hog production or cattle feeding facilities.

Serving as USMEF vice chair is Iowa pork producer Conley Nelson, general manager of Smithfield Foods’ hog production division in the company’s five-state Midwest region. Nelson is a past president of the National Pork Board and operates a farm that has been in his family for more than 120 years.

The newest USMEF officer is Idaho cattle feeder Cevin Jones, serving as secretary-treasurer. Along with his brother and other family members, Jones operates Intermountain Beef, a custom feedlot. He is vice chairman of the Federation of State Beef Councils, has served on the National Cattlemen’s Beef Association board of directors and is a past winner of the Idaho Cattle Feeder of the Year Award.