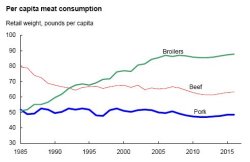 fleischwirtschaft.com — USA
Facebook
Twitter
The annual per capita consumption of meat and poultry will fall from 223 pounds in 2007 to a low of 213 pounds in 2012.

In its report, the U.S. Department of Agriculture (USDA) cited production adjustments due to higher feed costs caused by ethanol production and gains in respective imports. Growth will resume after the low in 2012, but, at about 219 pounds in 2016, consumption will remain lower than in recent years.

Strong demand for consistent, high-quality beef will continue in the domestic hotel and restaurant market, and increasingly in the retail market. Beef export markets will also primarily demand high-quality beef.

Poultry prices will remain lower than red meat prices. But production gains will slow down and per capita consumption will decline for several years as returns diminish.


You can buy the rights to this article here.
Source: U.S. Department of Agriculture (USDA)