USDA: US pork back to market in Argentinia
USDA

US pork back to market in Argentinia 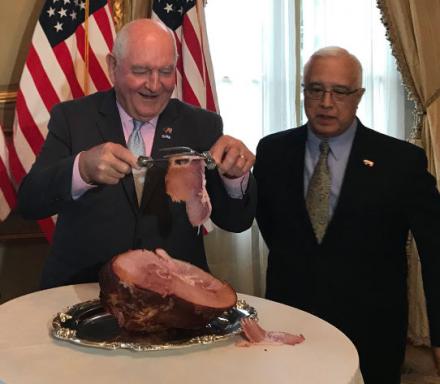 Secretary Sonny Perdue celebrates the reintroduction of U.S. pork into the Argentine market, with U.S. Ambassador to Argentina Edward Prado.


“The U.S. is the world’s third largest pork producer and a top exporter,” Secretary Perdue said. “This new market is a big victory for American farmers and ranchers. I am confident that once the people of Argentina get a taste of American pork products, they will only want more. This is a great day for our agriculture community and an example of how the Trump Administration is committed to supporting our producers by opening new markets for their products.”

The return of U.S. pork products to Argentina was sealed during Vice President Mike Pence’s visit to Buenos Aires. Technical staff from the U.S. Department of Agriculture and the Office of the U.S. Trade Representative have been working with Argentina’s Ministry on the terms of the agreement that are practical, science-based and consistent with relevant international animal health standards.

As President Trump and President Macri agreed in a Joint Statement in April 2017 in Washington, both countries are committed to further expansion of agricultural trade between the United States and Argentina.