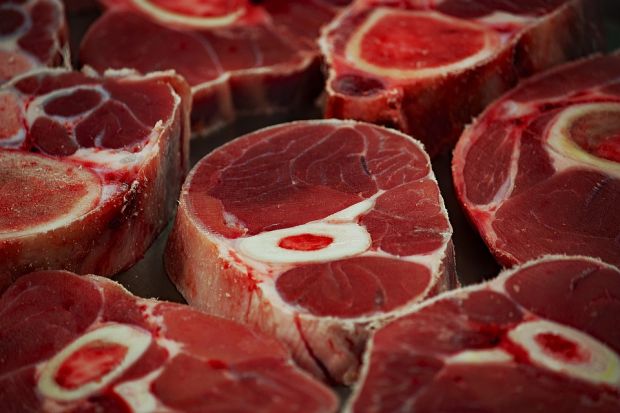 The decline in pork production is leading to demand for beef.

USA, Washington. The consequences of African swine fever (ASF) in Asia are also clearly felt on the global beef market. In China, where consumption is high, the slump in pork production has led to a great demand for other types of meat, which cannot be covered by domestic production.


These are a significant increase in imports. Beef imports in the first eight months of 2019 showing the strongest year-on-year increase of almost 54% according to Beijing customs statistics.

In its latest analysis of the world meat market, the US Department of Agriculture (USDA) assumes that China will import 2.40 mill. t of beef, including processed meat excluding offal, by the end of the year. That would be 933,000 t or almost 64% more than in 2018. In the coming year, demand is expected to grow further and imports are expected to rise by 20% to 2.90 mill. t.

For Japan, South Korea, Chile, Egypt and Mexico, too, analysts from Washington expect increasing beef imports by the end of 2020, albeit not as strongly as China. This is likely to be offset by lower purchases from countries such as the USA, Russia and Hong Kong; the European Union is also expected to be one of them.

According to the USDA, not all classic beef exporting countries will be able to benefit from the higher global import demand, because some of them simply lack the available supply. These include in particular Australia and New Zealand, where drought and reduced livestock numbers lead to a declined production.

For the EU, too, export growth is likely to be limited due to declining livestock numbers and rather lower production. For the current year, the USDA expects EU exports to rise by around 3% to 360,000 t, but to fall back to 350,000 t by 2020.

According to USDA, however, some South American countries will be able to draw on the full potential of exports this year and next year as production increases there. In Brazil, for example, beef production from 2018 to 2020 is expected to increase by a total of 900,000 t or 9% to the historic high of 10.8 mill. t, and exports by 517,000 t or around a quarter to 2.60 mill. t during this period.

Argentina will also be able to supply more beef to international customers with declining own consumption and growing production and, according to estimates by the analysts, will increase its exports by more than half between 2018 and 2020 to 775,000 t. The USDA also expects Mexico, India and Canada to increase their export volumes during the period under review.

For their own country, the Ministry's experts expect a modest increase in beef production of 0.3% in 2019, but a more pronounced increase of 2.7% to 12.62 mill. t in 2020. US beef exports are expected to decline by 1.1% this year compared to 2018, which is a consequence of the customs disputes with Mexico and China. In the coming year, however, they are expected to pick up speed thanks to higher production and reach a record level with an increase of 5.7% to 1.50 mill. t.

China's beef market is on the move

The strongest changes in production and consumption are expected for China worldwide. Beef production in China is expected to increase by about 400,000 t to 6.85 mill. t in the current year. According to current figures from the Beijing Statistical Office, production in the first three quarters of 2019 increased by only 140,000 t or 3.2% to 4.58 mill. t of beef compared to the same period last year.

According to the USDA, consumption in the People's Republic is expected to increase by 1.31 mill. t or 16.6% to 9.23 mill. t in the current year compared to 2018, outstripping that of the EU and Brazil for the first time. Even if the actual growth in consumption should be lower, China's massive increase in import requirements in a short period of time has already noticeably disrupted international trade flows on the world beef market.