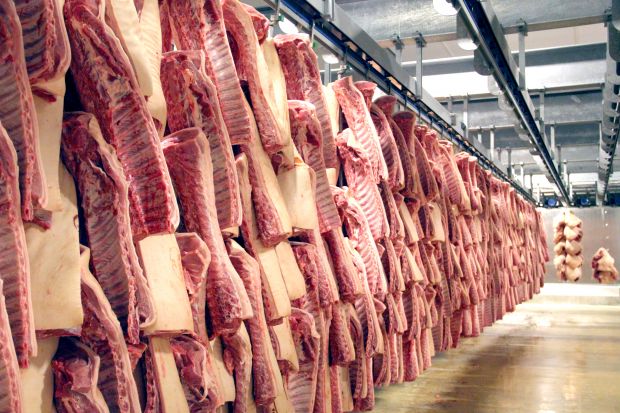 USA, Denver, Colorado. U.S. pork and beef exports posted a strong May performance, increasing significantly from the previous month and from year-ago levels, according to statistics released by USDA and compiled by the U.S. Meat Export Federation (USMEF).

Exports accounted for 13% of total U.S. beef production in May and 10% for muscle cuts only – each down one percentage point from a year ago. Through May, these ratios were steady with last year’s pace – 12.8% for total production and 10% for muscle cuts. Export value per head of fed slaughter averaged $265.55 in May, matching the average from a year ago. Through May, per-head export value averaged $270.27, up 8%. Beef export prices are also increasing, especially in key Asian markets, with double-digit increases in Japan and Korea in May illustrating the strong demand for U.S. beef.

“2017 is shaping up as a very solid year for U.S. pork and beef exports, but we remain in an extremely competitive situation in each of our key markets,” said Philip Seng, USMEF president and CEO. “That’s why it is so important to capitalize on every opportunity to increase carcass value, and this is where variety meat plays an important role. USMEF has been working with our industry partners to expand the range of variety meat product offerings and diversify their destinations, and those efforts are paying important dividends for producers.”

Fueled by exceptional growth in Colombia and Chile, pork exports to Central and South America were up 66% in volume (14,899 mt) in May and climbed 78% in value ($37.4 mill.). Through the first five months of the year, exports to this region were up 49% in volume to 68,640 mt and 53% in value to $165.2 mill. Chile’s imports are running 49% ahead of last year’s record pace, with the U.S. as its largest supplier (U.S. share climbed from 19 percent to 32%, gaining in competitiveness versus Brazil). Colombia’s domestic pork production has not kept pace with demand and imports are up 55%, with the U.S. as the dominant supplier (U.S. share is 83%, up from 76% last year).

Turning to the Asian markets, pork exports to leading value destination Japan were significantly higher in May, climbing 11% in volume (35,641 mt) and 20% in value ($145.5 mill.). Through May, exports to Japan increased 6% in volume (169,774 mt) and 12% in value ($686.3 mill.). This included a 2 percent increase in chilled pork to 91,236 mt, valued at $425 mill. (up 11%). U.S. market share in Japan has increased slightly from last year, reaching 36%. But competition remains fierce, with the EU dominating frozen pork imports and Canada continuing to make gains in the high-value chilled sector.

South Korea is a top performer for U.S. pork with January-May exports increasing 31% from a year ago in volume (81,313 mt) and 40% in value ($221.6 mill.). Although Korea’s pork production is running slightly higher than last year, demand for pork is very strong and U.S. pork is an increasingly attractive option. With online shopping especially popular in Korea and home meal replacement products and other convenience items offered both online and in stores, USMEF continues to introduce new U.S. processed pork items. The U.S. dominates Korea’s processed pork market, with imports from the U.S. valued at $24 mill. through May, up 3%.