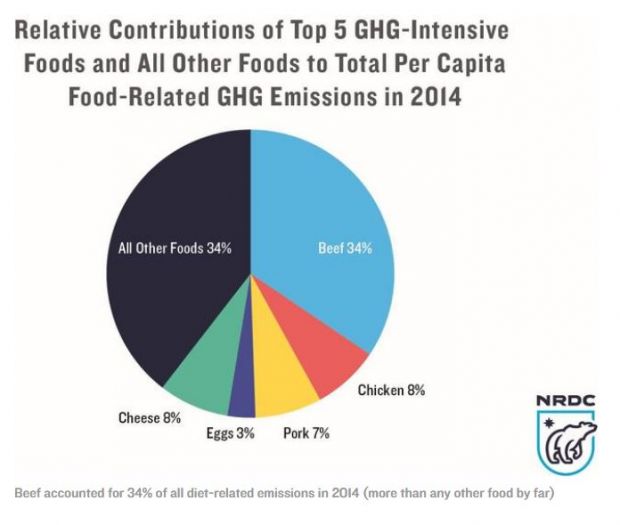 USA, New York. A new report – Less Beef, Less Carbon – released by NRDC shows that between 2005 and 2014, we reduced our per capita consumption of beef by 19%. This resulted in pollution reductions equivalent to removing tailpipe emissions of 39 mill. cars from the road. It also drove an overall 10% decrease in per capita emissions from the U.S. diet.

Per Capita Emissions Dropped, Driven by a 19% Decrease in Beef Consumption. Even more notably, because we ate much less beef, the overall emissions from our diet went down by 3%, despite a 9% increase in the U.S. population during this time.

The decrease in the consumption of beef documented in the report has, in large part, been a welcome side effect of growing concerns around the health impacts of eating too much red meat. In recent years, numerous public health organizations – from the American Heart Association to the World Health Organization to the Harvard School of Public Health have been recommending substituting healthier options for red meat. They cite an increased risk of cancer, heart disease, diabetes and premature death as reasons to cut our consumption. We can add the health of the planet to that list.

The marketplace is taking note. The restaurant industry has reported a decreasing preference for red meat in their menus. The James Beard Foundation, a leading industry collaborative said that one of the top food trend forecasts for 2017 is likely to be "“seeing beef move from the star of a menu to more of a supporting player.” The National Restaurant Association’s 2016 ‘What's Hot Survey' also stated that “nearly 60% of professional chefs listed meatless items among the top culinary trends.”

But while Americans reduced beef consumption in recent years, they still eat much more than health experts recommend and much more than most countries in the world. They rank fourth globally in per capita beef consumption, eating more than twice as much red meat as suggested by USDA’s recommended dietary patterns. This overconsumption also continues to have serious consequences for the planet. This analysis shows that beef consumption accounted for 34% of the emissions from the U.S. diet in 2014, the single largest source by far of any food. A continued reduction of red meat consumption in our diet will bring even more benefits to our environment and health.