by Editor fleischwirtschaft.com
Wednesday, May 06, 2020 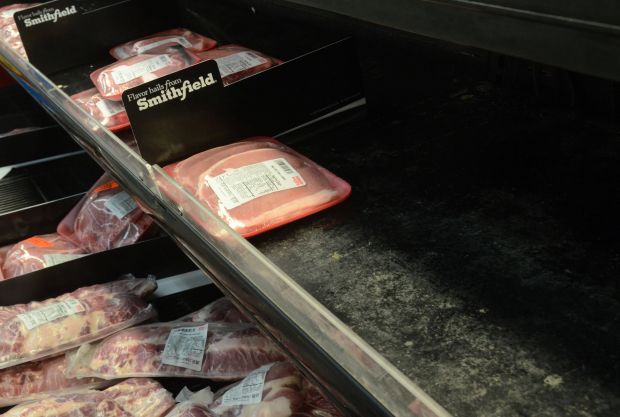 fleischwirtschaft.com — GERMANY, Frankfurt. Since March 8, the meat department has been the undisputed sales leader of the perimeter. Year-to-date through April 26, meat department dollar sales were up 21.7%, boosted by double-digit growth for seven weeks running. Year-to-date volume sales through April 26 were up 15.9% over the same period in 2019 as volume has been trailing dollars throughout the pandemic. Additionally, the gap between volume and dollar sales is widening —signaling significant upward pressure on pricing due to tightness in the supply chain.
Facebook
Twitter

For the last full week of April, ending April 26, dollar sales were up 49.7% and volume increased 34.8%. This week, there was an increasing amount of coverage of the various plant closures in consumer media which likely caused additional trips and purchases of shoppers looking to stock up some more. In addition to the continued strong performance by the meat department, overall perimeter sales gains rebounded in the holiday-free week in either year, up 23.1%. For the total perimeter, significant decreases in deli-prepared, fresh bakery and seafood pulled down the increases achieved by meat but fresh foods overall are still positive.

Market US Beef prices under pressure

Volume gains have been trailing dollars for years, but the gap is widening. The latest four weeks ending April 26 versus the comparable period in 2019 show volume/dollar gaps ranging from nearly 13 percentage points for turkey, 12 points for pork, 10 points for beef to just 4 points for chicken. Volume/dollar gaps for processed meats are significant as well, whether smoked ham/pork or Frankfurters. Bacon continued to see dollar and volume sales track closely given the ample supply due to the decline in foodservice demand.

Supply is likely to continue to impact the dollar and volume performance in weeks to come. “Plants are beginning to reopen, but labor has been slow to return and volumes remain sharply below year-ago levels,” said Christine McCracken, Executive Director Food & Agribusiness for Rabobank. “Beef and pork production are both down 35% year-over-year. A handful of chicken and turkey plants closed in the past week, but the impact on total production has been limited. Processors are allocating limited supplies to their bigger customers, leaving smaller, more regional operators with fewer options.”

It is likely that consumers will continue to shift back and forth between proteins as they have in prior years when inflation or deflation affected the retail marketplace. But the effect of fewer options available can be seen in IRI’s insights on the average number of items per store selling. The average items number saw another drop the week of April 26 and reached its lowest point since the week of March 29. This is 34 fewer items than the same week last year.

“Based on the current market changes as well as announced plant closures, sourcing has been challenging to say the least,” said Samer Rahman, Senior Director of Meat and Seafood for Allegiance Retail Services. “With the news reports on plant closures, customers are under the impression meat will not be available in any form. They were alarmed by these reports and started loading up on fresh and frozen meats. An additional obstacle in sourcing meat is the reopening of restaurant businesses in multiple states, resulting in foodservice companies coming into the market to purchase their needs. This dynamic has affected the USDA markets to levels I have never seen before. In a matter of days, the cost of middle meats has gone up over 30%. The ability to rebound on product in the upcoming weeks is not likely. The demand is too high with limited product supply. I have had to explore additional options, from Australian meats to frozen chicken and burgers to have as an alternate offering to the customers the next few weeks.”

On the impact of the supply chain issues on the consumer, McCracken added, “Consumers will begin to begin to see noticeable shortages of pork, beef and chicken at retail the first full week of May, as prolonged plant closures and labor-related disruption have cleared fresh meat inventories.” Many consumer commented on limited supply on the Retail Feedback Group Constant Customer Feedback system. “There was limited meat/chicken to choose from. I totally understand this was most likely due to the pandemic.” Another wrote in, “Unfortunately, Covid-19 has the meat department lacking a good selection. You probably need to put limits on the amounts of meat per purchase, since the news media is hyping the possible coming shortage, so that people don't start hoarding, like the toilet paper issue.” Shoppers are also noticing higher prices and fewer meat features and additional safety measures many retailers are taking. “Prices have gone up on items cause of the virus but there are people who cannot afford items especially meats with a very tight budget,” said a shopper on CCF.  Another said, “Just a little frustrated that there were no meats on sale. I was looking for a roast, an item I do not purchase too often, but none were on sale and they are so expensive.”

McCracken agreed that the recent media attention on meat shortages drove another round of panic buying starting the last week of April and going into May. “We are already seeing stronger foodservice demand for meat as quarantine measures are lifted and restaurants reopen. The combination of tight supplies and renewed foodservice interest drove beef prices to record highs, up 35% week-over-week,” said McCracken. “The sharp drop in pork volumes and good demand also boosted pork prices, up 23% week-over-week,  led by stronger loin values and a recovery in bellies.”

Beef and chicken, the two largest proteins, saw the largest increases in terms of dollars during the week of April 26 versus the comparable week in 2019. In absolute dollars, beef sold an additional $229 mill., with ground beef generating 39% of these additional dollars, or +$88 mill. Chicken generated $79 mill. more during the last full week of April versus the same week in 2019.

Going into May, several states have released detailed plans for re-opening in phases. In some, restaurants could reopen starting May 1, though often with social distancing and occupancy rate restrictions in place. This is resulting in a bump in meat demand over the severely diminished volumes seen these past few months.  The reopening of restaurants in these states may provide an indicator of consumers’ mental readiness and economic ability to re-engage with foodservice. The widely covered meat shortages in consumer media caused a renewed run on meat the first week of May, which likely means highly elevated numbers in next week’s results as well. For the foreseeable future, it is likely that grocery retailing will continue to capture an above-average share of the food dollar.