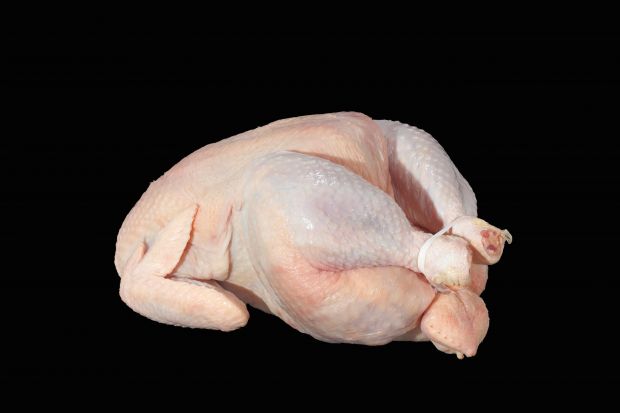 From the top nine retailers 59.1% of samples tested from January to March 2018 had a contamination level at colony forming units per gram (cfu/g) less than ten. This compares to 57.7% from the previous set of results in October-December and 48.7% from July-September 2017.

Campylobacter
is the most common cause of food poisoning in the UK. The infectious dose can be as low as a few hundred cells.

Michael Wight, director of policy and science at the Food Standards Agency (FSA), said: "The latest figures are consistent with previous results and show we are consolidating on the significant progress mode so far. We will continue to actively work with retailers and smaller poultry businesses to further reduce Campylobacter levels.

Across the major retailers, 3.8% tested positive for the highest level of contamination (chickens carrying more than 1,000 cfu/g of Campylobacter). The figure for October-December was 3.6% and for July-September 2017 it was 4.6%.

However, the FSA said method of results analysis was adjusted to more accurately reflect variations between sample numbers submitted by retailers. It added figures from July-December 2017 have been revised to allow a 'meaningful' comparison across the sampling period.

Major retailers started doing their own sampling and publishing results in September last year. For the first three months of this year, 3% of 605 samples byTesco were positive at the highest level of contamination. The percentage of chickens with levels above 1,000 cfu/g for Asda was 7.9%, for Sainsburys it was below 6%, for Aldi 5.3% of birds and around 2% for Lidl but it was not clear how many samples were tested. Morrisons said none of its chickens had the higher levels of contamination from a sample of 130 tests. The figure was 5% for Marks and Spencer based on 300 samples taken at random from store shelves across the UK and tested in UKAS accredited laboratories.

The FSA has been testing chickens for Campylobacter since February 2014 but focus is now on smaller retailers and the independent market.