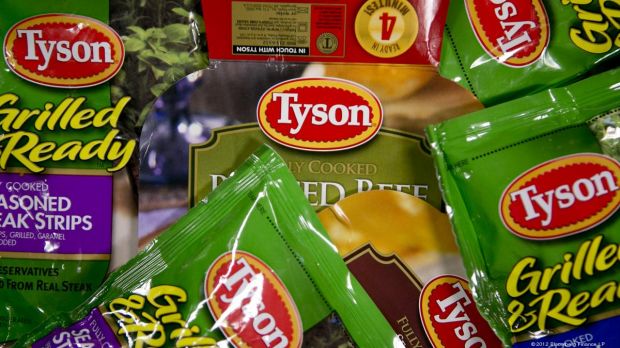 USA, Springdale, AR. Tyson Foods, the US meat giant that in recent years has bet big on packaged foods, is rebooting some of its most established brands as US consumers increasingly favour fresh ingredients.


The company is whipping up new recipes, such as soy ginger pork chops and herbed chicken with farmstand veggies, so that it doesn’t miss out on healthy sales from the perimeter of grocery stores. That’s where supermarkets traditionally stock their freshest foods. In contrast, sales growth in foods packed in cans and boxes, which are usually found in the central aisles, has been slowing for years.

Tyson is reinventing brands such as Jimmy Dean and Ball Park, which are usually associated with processed or frozen meat, for example, by creating products with fresh scrambled eggs and beef patties. The company is also looking at expanding sales of its Tastemakers meal kits that were launched last year and which are sold on Amazon.com and at several hundred Texan grocery stores, said Sally Grimes, its president of North American retail.

Tyson, the largest US meat producer, has been spending heavily for the past several years on prepared foods, where the margins are higher and the revenue is more stable compared with its traditional commodity-meat business. Two acquisitions, Hillshire Brands Co for $8.4 bn. in 2014, and AdvancePierre Foods Holdings Inc for $4.1 bn. earlier this year, were part of that strategy, adding a range of ready-made food products.

Yet even though the Hillshire deal was a success, helping Tyson boost adjusted earnings by more than 50% in following two years, it’s facing headwinds. Retailers are fighting over consumers by lowering prices for eggs and milk, for example. Fresh-food sales make up almost three-quarters of retail revenue growth in supermarkets, Grimes said.

Meanwhile, Amazon’s plan to buy Whole Foods Market threatens to alter how and where food is sold and delivered. Such factors may contribute to a further squeeze on margins for packaged-food suppliers, more so than those for fresh-meat producers, according to Bloomberg Intelligence analyst Ken Shea.

While the Tastemakers kits are a small piece of Tyson’s business, the growth is exciting, Grimes said, declining to provide exact sales figures. Tyson has in recent months started selling them in some Texas stores operated by Wal-Mart Stores, Target and Kroger. Tyson also will continue working with Amazon to sell the kits, Grimes said.

No determination has been made on whether Tyson will enter an agreement to be a private-label supplier for Amazon’s meal kits, she said.