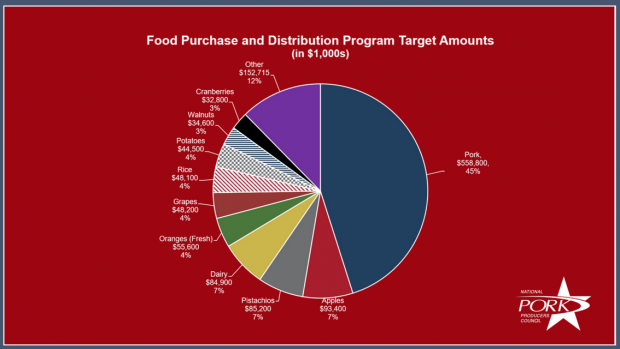 USA, Washington, DC. The National Pork Producers Council commended the Trump administration for providing assistance to America’s farmers suffering from the ongoing trade disputes with China, Mexico and other nations.


The US Department of Agriculture announced details of a $12 bn. aid package for U.S. agriculture, including a nearly $559 mill. purchase of pork for federal nutrition assistance and child nutrition programs, $200 mill. for developing foreign markets for US agricultural products and some direct payments to farmers, including pork producers. They would receive $8 per hog based on 50% of the number of animals they owned on 1 August.

“True to his word that he would have our backs, President Trump demonstrated his commitment to America’s farmers, including pork producers, by giving us some relief from the financial hit we’ve taken from retaliatory tariffs from some of our biggest trading partners,” said NPPC President Jim Heimerl, a hog farmer from Johnstown, Ohio.

US pork exports to China are down significantly for the year, with the value falling by 9% through June. The drop has come mostly because of the 50% additional tariff that country imposed in response to US duties on Chinese steel and aluminum imports and on other goods over China’s theft of intellectual property and its forced transfers of US technology. Exports to Mexico are down slightly. In June, it put a 10% tariff on pork in response to US tariffs on Mexican steel and aluminum imports; the duty increased to 20% on July 5.

“While we’re grateful and commend the administration for its action to help us,” Heimerl said, “what pork producers really want is to export more pork, and that means ending these trade disputes soon.”

In addition to continuing to press for a swift resolution to the trade wars, NPPC is asking the White House and congressional lawmakers to approve public-policy initiatives that would buoy pork producers, including ones that would:

NPPC also is urging the administration to quickly conclude talks on a new trade agreement with Mexico, reiterating its priorities of maintaining the zero-tariff rate on pork traded with that country and of lifting the tariffs on steel and aluminum from Mexico so it will drop its retaliatory tariffs on U.S. pork and other products.