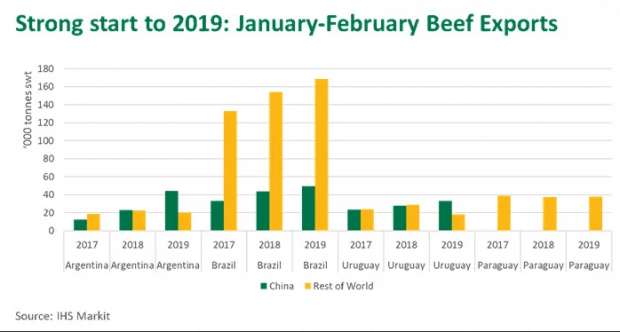 Led by Brazil and Argentina, beef exports out of South America continued to expand in the opening two months of 2019.

AUSTRALIA, North Sydney. Led by Brazil and Argentina, beef exports out of South America continued to expand in the opening two months of 2019, as highlighted in a newly-commissioned monthly report by MLA and Steiner Consulting.


Growth comes on the back of a very strong 2018, during which shipments from Argentina rocketed 74% year-on-year – following a collapse in the currency and removal of export controls – and exports from Brazil and Uruguay expanded 12% and 7% respectively.

However, more importantly, the bulk of export growth was destined for Asian markets, namely China – Australia’s fourth largest market in 2018. While some high-value Asian markets, such as Japan and Korea, maintain restrictions on beef from some exporters, Asia accounted for 47% of beef shipments from South America’s top four exporters in 2018, up from just 10% a decade ago.

Exports from Brazil also benefitted from the resumption of trade with Russia in December, once the principal market for the South American exporter. In the first two months of 2019, Brazil exported 7,500 t shipped weight (swt) to Russia – compared to nothing shipped in the first 11 months of 2018 and the 138,000 t shipped in 2017. The resumption of trade to Russia will be key to soaking up additional Brazilian beef entering the global market. In addition, Brazil also recorded strong export growth to the Middle East – namely the UAE (up 7,200 t swt year-on-year), Saudi Arabia (up 2,600 t swt) and Turkey (up 5,600 t swt).

While a softer Australian dollar during the first quarter has helped Australia remain competitive with the US, the Brazilian real and Argentine peso have depreciated significantly over the past 18 months, allowing them to push cheap beef onto the global market. Looking ahead, Uruguay will be restricted by supply constraints, however, may continue to pivot product to China. Meanwhile, shipments from Paraguay have been lacklustre in recent years and the supplier remains focused on Russia and Chile. Argentina and Brazil still have capacity to ramp up beef exports in 2019, as weak currencies and the poor-performing economies draw product away from the domestic market and into export markets.