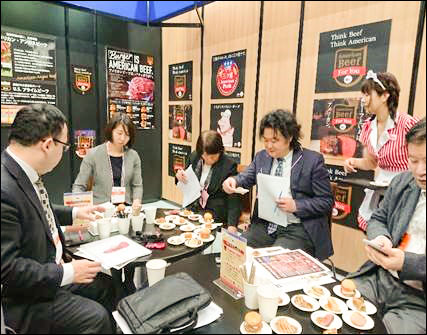 USMEF served roasted US pork and beef to prospective customers at a special reception at the trade show. Themed, “Eat America: Dynamic Taste of America,” the reception was attended by 1,000 representatives of member companies.

At the trade show, USMEF introduced the “Three-Star (Mitsuboshi)” concept, which is designed to promote the quality and flavor of US pork and pork products through original three-star recipes. One method allows consumers to produce US pork cutlets and steaks that are juicy and flavorful through low temperature cooking. Another method features US pork back ribs, traditionally popular for grilling, as a potential new item for deep frying. USMEF also introduced Mitsuboshi Rich Sauce, a US pork-specialized steak sauce developed by a well-known French chef.