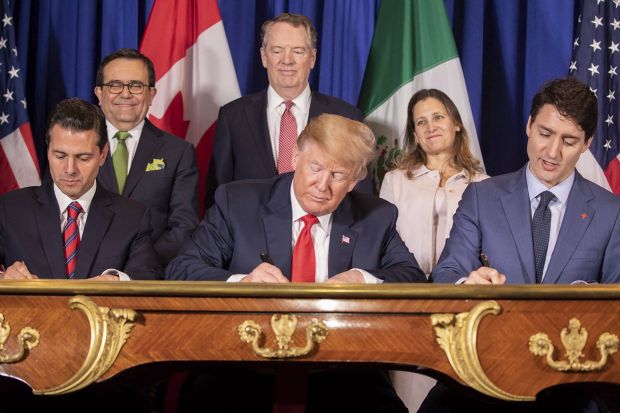 USA, Washington. Mexico approved US changes to the US-Mexico-Canada (USMCA) trade agreement, paving the way for a congressional ratification. The Trump administration worked closely with Congressional Democrats to address their concerns in the revisions to the agreement.


The North American Meat Institute called on Congress to swiftly approve USMCA, a trade agreement preserving duty-free access to two of the US meat and poultry industry’s most critical foreign markets.

“We are pleased with the agreement reached between the Trump Administration and House Leadership allowing Congress to consider USMCA before the holidays,” said Meat Institute President and CEO Julie Anna Potts. “The US meat and poultry industry exports $5.5 bn. annually in products to Canada and Mexico. Swift adoption of this agreement is critical to meat and poultry processors and the millions of US farmers, ranchers, allied manufacturers and transportation companies in the food supply chain.”

Under the previous agreement, the North American Free Trade Agreement (NAFTA), US meat and poultry exports to Mexico and Canada thrived as import duties were removed and non-scientific barriers to trade were significantly reduced. The North American market for the meat and poultry industry is nearly completely integrated, and this integration is essential to its long-term viability.

National Cattlemen’s Beef Association President Jennifer Houston issued the following statement: „There is no higher policy priority for America's beef producers than maintaining our duty-free access to Canada and Mexico, and that's exactly what the USMCA will do. Now is the time for Congress to approve USMCA so our producers can move forward with the certainty they need and deserve."

“Mexico’s approval of USMCA changes proposed by the United States is welcome news for US pork producers and all of American agriculture,” said NPPC President David Herring. “Members of Congress can count on hearing, yet again, from pork producers as NPPC is unleashing a grassroots call to action. We want a vote this year and NPPC will score this critically important trade agreement as a key vote.”