Opportunities for US agricultural exports in Taiwan 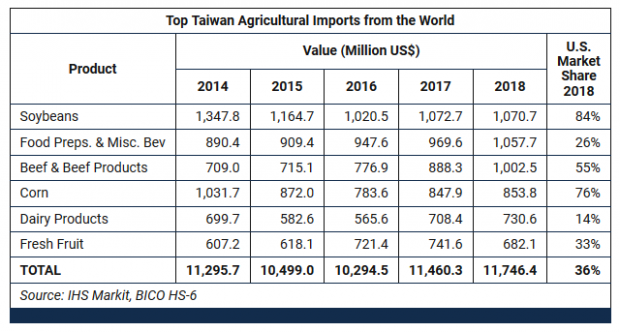 USA, Washington. Taiwan is an important trading partner and offers many opportunities for sales of US food and agricultural products. Because of its small land area and high urbanization rate, Taiwan has a relatively small agricultural sector and relies on imports for domestic use.


Despite having a population of only 23.5 mill., Taiwan was the United States’ ninth-largest export market for farm and food products in 2018. The United States’ reputation among Taiwan’s consumers for high-quality food and agricultural products and competitive prices indicates a favorable environment for future growth and opportunities.

Taiwan is an aging society, with more than 20% of its population expected to be older than 65 by 2026. Changing demographics and increasing incomes have transformed consumption patterns, with higher consumption levels of prepared foods and greater demand for healthy products. Taiwan consumers are also eating at restaurants more frequently, helping ignite strong growth in fast food chains and casual dining establishments. These transformations led to growth between 2014 and 2018 in consumption of high-value products such as beef, fresh fruits, and tree nuts. The United States is a primary supplier for all these products.

Taiwan has one of the world’s wealthiest economies on a per-capita basis. Its economy is driven primarily by manufacturing of electronic and computer components, with agriculture accounting for only about 2% of Taiwan’s 2017 gross domestic product. Because of its dependence on imported agricultural products, Taiwan is expected to remain a large and growing destination for US exporters. While Taiwan’s agricultural imports from the world only increased by 2% in 2018, imports from the United States increased by 18%.

Taiwan ranked as the 16th-largest global agricultural importer in 2018, reaching $11.7 bn. The United States holds the largest share of Taiwan’s total agricultural imports, with a 36% market share in 2018, despite high import tariffs facing many US products including poultry, pork, and rice. US competitors include the European Union with a 12% market share, New Zealand with 7%, and China with 6%.

Taiwan has free trade agreements with Panama, Guatemala, Nicaragua, El Salvador, Honduras, New Zealand, and Singapore, and has preferential trade agreements with China, Paraguay, and eSwatini (formerly Swaziland). Taiwan’s New Southbound Policy, launched in 2016, seeks to increase trade and economic cooperation with neighbors in South Asia, Southeast Asia, and Australasia, which may provide some preferences for US competitors like Australia and New Zealand.

According to Euromonitor International, Taiwan’s households spent more money on meat products than any other type of food, on average about $1,500, in 2017. Beef is Taiwan’s most-imported meat product, with imports valued at more than $1 bn. in 2018. Taiwan’s domestic beef production is negligible. The United States holds the largest market share of beef at 55%. Consumers have high regard for US beef quality and safety, but lingering concerns about bovine spongiform encephalopathy remain. Beef products from the United States must be derived from cattle less than 30 months of age to be eligible for export to Taiwan, and most beef offal from the United States is banned. However, Taiwan’s imports of US beef continue to increase because of high growth in per capita beef consumption.

The United States holds a 91% market share of poultry imports, as it is one of the few countries certified to export poultry meat to Taiwan. However, domestic production is significant and able to meet most demand, making Taiwan the main competitor for US exporters. Taiwan consumers prefer dark meat over breast meat, with broiler thighs, legs, and wings representing a majority of the United States’ $189.4 mill. in poultry exports to Taiwan in 2018.