Trade: Cattle prices out of step with North a...
Trade

Cattle prices out of step with North and South America 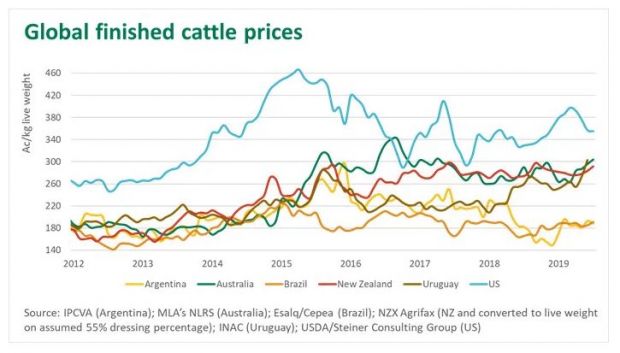 Limited supply of slaughter-ready cattle and strong demand in key export markets has kept the pressure on finished cattle prices.


Australian cattle prices typically track between their North and South American counterparts but recent movements have pushed the Australia market closer towards the US.

In contrast, the Australian market has pulled away from that of Argentina and Brazil, the two South American heavyweights whose cattle have become very cheap by global comparisons due to significant currency depreciation. New Zealand has largely kept pace over the last two years and Uruguay has broken away from its South American neighbours to trade near parity with Australia, due to acute supply shortages.

The US remains Australia’s most significant global beef competitor. It is the world’s largest producer and has the greatest overlap in high value markets with Australia – and the relative increase in Australian cattle prices reflects the strong competition in international markets, particularly Japan and Korea. While the US herd may currently, or soon, be in a contraction, beef supplies are not expected to recede in the next year. Moreover, when Australia has a solid drink and the herd enters a rebuild phase, the cattle market may come under significant upward pressure and approach, or even surpass, the US, as witnessed briefly in 2016.

Meanwhile, Argentina and Brazil will continue pumping large volumes of cheap beef onto global markets. South American suppliers primary overlap with Australia in China but, fortunately, the market has demonstrated an insatiable appetite for beef imports over the last twenty-four months. However, if trade with the world’s largest imported beef market was to slow down, cheap product out of South America could be diverted into other markets where Australia operates, such as South East Asia.