From Editor fleischwirtschaft.com
Tuesday, May 28, 2019 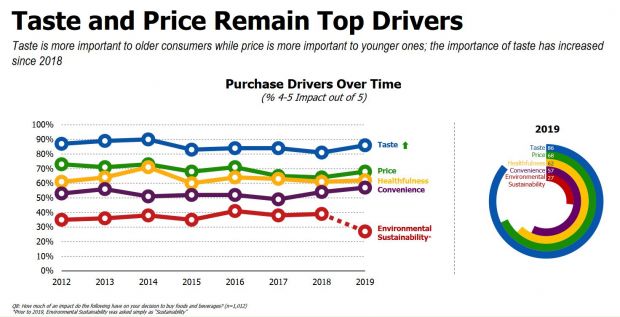 USA, Washington. Topics like sustainability, plant-based diets and clean eating seem to permeate news about food, but it turns out they’re not just buzzwords or “flavors of the week.” IFIC Foundation’s 2019 Food and Health Survey shows genuine and growing interest in these and other trends.


The 2019 edition marks the 14th consecutive year that IFIC Foundation has surveyed American consumers to understand their perceptions, beliefs and behaviors around food and food-purchasing decisions.

Previous Food and Health Surveys asked consumers about their views on sustainability, but their interpretations of the concept varied. This year’s survey gets more specific by asking consumers what they look for in order to know whether a product is environmentally sustainable.

Every year the survey identifies leading factors that impact food and beverage purchases. Every Survey has seen “taste” reign supreme and in 2019 the trend continues. Deemed important by 86% of consumers, the impact of taste on purchasing decisions is up significantly from 81% in 2018. Other factors such as “price” (68%), “healthfulness” (62%) and “convenience” (57%) held steady.

“Sustainability” as a purchase driver registered in the mid- to high-30 percentages through the years, but the 2019 refinement to “environmental sustainability” resulted in a drop to 27%, indicating that consumers may think of more than the environment when it comes to sustainability.

Sustainability isn’t the only term that means different things to different people. Even a seemingly straightforward term like “plant-based” is subject to interpretation. About three-quarters (73%) of people say they have heard of plant-based diets, and about half (51%) are interested in learning more about them. Consumers who have tried any diet in the past year are far more likely to have heard of plant-based diets than those who have not tried a diet in the past year (82% vs. 68%).

Animal products are a more popular source of protein than plants, with 52% of Survey takers saying they eat animal protein at least once per day versus 34% who say they eat plant-based protein—but the tide may be turning. Within the past year, 24% of consumers reported eating more plant protein than the previous year, while only half as many (12%) said they ate more animal protein.

Also on the topic of diets, few buzzwords were buzzier than eating “clean.” The 2019 Food & Health Survey added “clean eating” as an option to a question about whether consumers have followed any specific diet or eating pattern in the past year. This year, 38% answered “yes,” up slightly from 36% in 2018. “Clean eating” was the most widely cited diet at 10%, followed by intermittent fasting at 9%, then gluten-free and low-carb, both at 6%. The percentage of people that tried ketogenic or high-fat diets doubled (6% in 2019 vs. 3% in 2018), while there were marked declines for people taking up paleo (down to 3% in 2019 from 7% in 2018) and Whole30 (down to 2% from 5%) diets.

Consumer awareness and comprehension of some important food and nutrition terms is lacking. Only about one-quarter (23%) of consumers understand “nutrient-density,” which refers to foods with a higher proportion of nutrients and fewer “empty” calories. Nearly three in five (58%) have not even heard of the term. In general, younger consumers reported far greater understanding and awareness of nutrient-density than older ones (34% of those age 18-34 understand it vs. just 9% among those 65 and older).

The results are derived from an online survey of 1,012 Americans ages 18 – 80, conducted March 22 to April 9, 2019. Results were weighted to ensure that they are reflective of the American population, as seen in the 2018 Current Population Survey.  Specifically, they were weighted by age, education, gender, race/ethnicity and region. The survey was conducted by Greenwald & Associates, using Dynata’s (formerly known as ResearchNow) consumer panel.