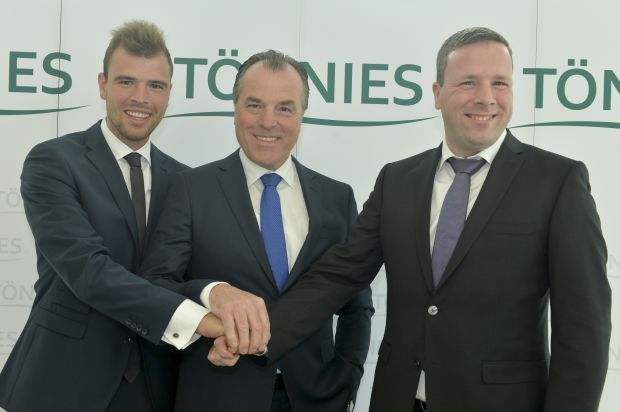 Agreement after years of power disputes within the group (from right to left): Robert and his uncle Clemens Tönnies, with son Maximilian.

The dispute over the leadership of Germany's largest slaughtering and cutting company, the Tönnies group, has come to an end. The power struggle, which lasted years, took a new turn at the end of last week.

The dispute in the Tönnies family revolved around five per cent of the group's shares which Robert Tönnies initially gave to his uncle Clemens Tönnies, but later demanded back. The nephew felt betrayed by his uncle's private investments, for example in the Zur Mühlen group. The parties have now reached an out-of-court settlement and drawn a line under the feud by signing a conciliation agreement.

With the mutual agreement of both parties, the Tönnies group now has a new structure. In the future all previous activities of the Tönnies and Zur Mühlen groups will be merged and developed under the umbrella of a family holding company. Clemens and Robert Tönnies will assume leadership as equal managing directors. Both parties can appoint other executives to the board. Clemens Tönnies has already appointed his chief financial officer Daniel Nottbrock. An advisory board, consisting of the former adversaries and up to five other members, deliberates on key issues. The aim of this is to prevent any potential stalemate situations.
The Companies
The slaughtering and cutting company Tönnies slaughtered a total of 20.4 million pigs in 2016 and posted a turnover of EUR 6.3 billion. +++ The Zur Mühlen group generated an annual turnover of EUR 700 million. Companies belonging to the Zur Mühlen group include the meat processors Böklunder, Gutfried, Heines, Jensen's, Könecke, Naumburger, Plumrose, Schulte, Redlefsen, Zerbster Original.
In future the company will be headed by the Tönnies Holding management which is being expanded to include the Sausages Division. As part of the reorganisation, the son of Clemens Tönnies, Maximilian, is joining the group as a partner. The intention here is to pave the way for a smooth transition to the next generation.

The agreement is still subject to approval by the competition authorities.