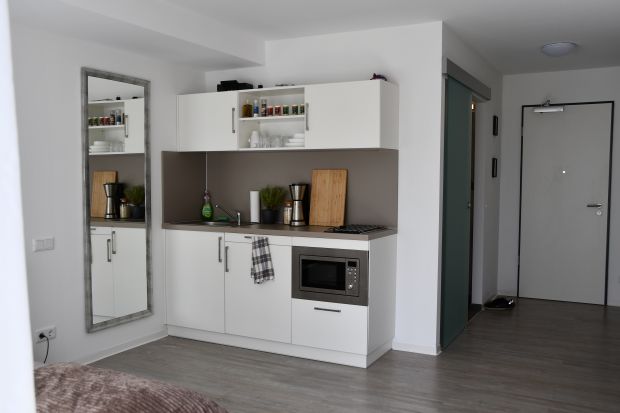 The show kitchen in the show flat.

GERMANY, Rheda-Wiedenbrück. The Tönnies Group yesterday presented its future living space concept for employees. At the heart of the concept is the aim of providing affordable and well-equipped apartments to a fixed standard for employees on contract to be permanently employed by the company in the future.

As of 1 January 2021, Tönnies will rely on staff employed directly by the company in the core areas of production. The majority of those currently employed under the works contract already live in privately rented apartments and houses, around 30 percent live in apartments provided by works companies. According to a press release Tönnies now wants to create and make available their own residential units, especially for this group.

"Integration and a firm local bond is achieved first and foremost through reasonable living conditions", says Daniel Nottbrock, Managing Director of Tönnies Holding. "We want to bind people to our company in the long term. And the first key to this are well-equipped residential units at local market rents".

In order to implement the new building plans quickly, the company has recently contacted local authorities in the region and has already written directly to 21 mayors. "We have the finished concept and can submit a building application within 14 days. To implement the plans, we now need building land in the towns and communities," says Daniel Nottbrock, adding: "The new apartments will also relieve pressure on the domestic housing market. Important for the location is the proximity to supermarkets and the proximity to the workplace. This would also make transport to the company more effective and more concentrated.
Source: Tönnies
tags:
Daniel Nottbrock Lemgo Germany Rheda-Wiedenbrück