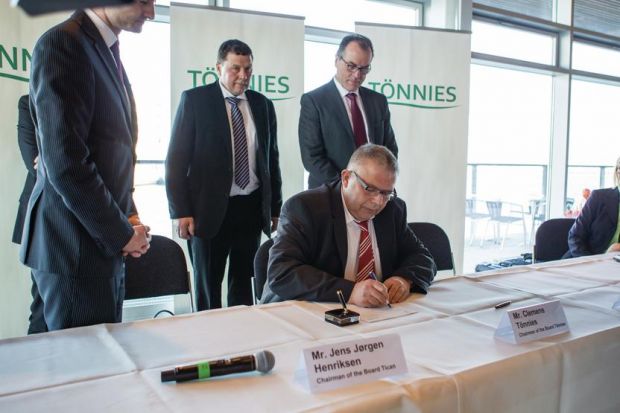 DENMARK, Thisted/Brörup. The integration of Tican into the German Tönnies Group is now close to completion.

After a difficult year 2017, the Tican Group has reached the breakeven in 2018. Tönnies acquired the Tican Group back in March 2016 and since then, the Danish companies Tican Fresh Meat A/S and SB Pork A/S have been streamlined to fit into the bigger picture of the Tönnies Group.

The integration will now be completed by a merger of the two companies under the name of Tican Fresh Meat A/S. The financial year 2018 will be closed by the end of December. The restructuring of the Danish business has been successful and the financial result will be positive for 2018.

One of the reasons for the turnaround is the growing relationship to the Danish farmers. Tican and SB Pork are right now on the same number of slaughter pigs as prior to September 2017. Furthermore the company has closed contracts with farmers, who start delivering pigs during 2019. This means that the capacity in Thisted and Brörup is planned to be increased in the coming year.

Especially the farmers profit by more challenge in Denmark. The agreement Tican has with the farmers is, that they offer the best price in the market for their slaughter pigs. Benchmarks made by independent consultants give the farmer certainty, that Tican Group lives up to their promise. The benchmarks shows, that Tican is paying DKK5-10 per pig above the general price level in the market.

A popular part of our settlement price is, that Tican Group pays a bonus of øre80/kg up front by delivery of the pigs. This gives the farmer an attractive cash advantage – they don’t need to wait several months for the bonus.

The most important investment in 2018 took place in SB Pork, where a completely new facility for processing of casings was constructed. The total investment was €3.5 mill. In Thisted Tican will start the development of the area around the factory – including an extension of the production facilities in 2019.