Slower growth for the industry leader 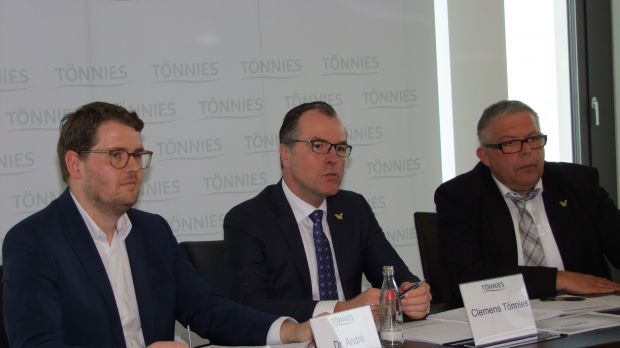 As a leader in quality and prices, Clemens Tönnies (centre) is always slightly ahead of the competition.

GERMANY, Rheda-Wiedenbrück. The Tönnies family group presented its 2016 figures in the middle of March. Company owner Clemens Tönnies reported a particularly challenging business year that was marked by challenging price conditions on the one hand and tough competition on the other.

Tönnies was more than a little proud to announce rising turnover despite falling prices for slaughter pigs: the North Rhine-Westphalian slaughter and cutting group posted revenue of € 6.35 bn. in 2016. This represents an increase of 0.8% on the previous year. The figure includes the acquisition of the Danish company Tican. The company owner gave no details about profits.

Tönnies slaughtered a total of 20.4 mill. pigs in 2016, 16.2 mill. of which in Germany. Domestically, the group's performance therefore remained at the previous year's level. The number of pigs slaughtered abroad rose by 400,000, representing an increase of 2%.

Against this background Tönnies was satisfied with the acquisition of Tican almost a year ago. "The Danes understood very quickly how we tick in Rheda," said Clemens Tönnies with a twinkle in his eye. Nevertheless, the integration process required considerable effort. Harmonisation of the IT systems is the final step and that is now more or less complete, he said. The Tican boss Ove Theijs pointed to the increase in slaughter numbers in Denmark which is bucking the market trend, and the successful marketing in Asian countries, in Australia, the UK and the USA.

Pork production is also growing in Russia, Tönnies reported. For many years now the businessman has been nurturing the goal of setting up his own meat processing plant in Russia. But production of the raw material first needs to be established and a marketing partner found. This is now more or less in reach, explained Tönnies. A potential business partner has already been found.

The 2016 growth figures for the beef sector were unchanged from 2015. The company slaughtered a total of 424,000 livestock units. The rate of animals slaughtered in-house rose to almost 100%, Clemens Tönnies reported.

Employee numbers also remained unchanged. 12,500 employees work worldwide for the family company which was founded in 1971. It currently has 171 young trainees. Roughly 6,300 employees work at the headquarters in Rheda, about half of them on temporary contracts.