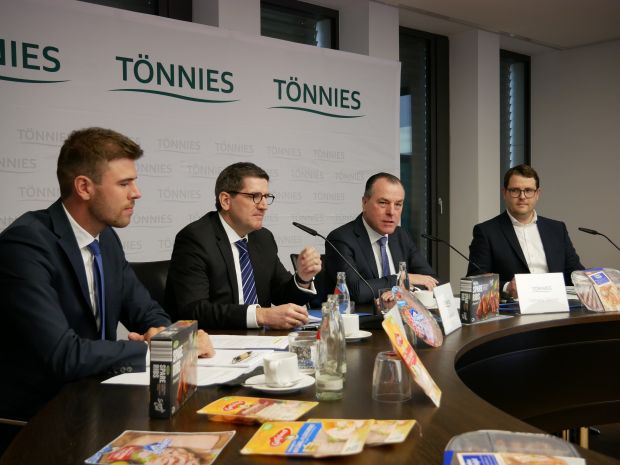 GERMANY, Rheda-Wiedenbrück. At its annual press conference, the Tönnies Group reported on its sustainable development in the financial year 2018, its strategy for growthand key questions in the meat industry.


"The meat industry is changing." says Managing Director Clemens Tönnies. "We are pioneers in the field of animal welfare, identification of origin and transparency for consumers and intend to drive the industry forward", explainsManager Andres Ruff.

In the beef sector, Tönnies processed and butchered a total of 440,000 cattle in 2018 (+2%, 2017: 432,000). Due to the weak prices for pork, which were 12.5% lower than in the previous year, with €6.65 bn., group sales were 3.6% lower than in the previous year. "In a very heterogeneous German meat market Tönnies has a good growth in the beefand pork sector.Overall, we are the driver for sustainable development in order to meet consumer demands", says Andres Ruff, Manager of Tönnies Holding.

During the past year, Tönnies has thoroughly reviewed all of its locations. "We are concentrating and specialising our locations. For example, in Gütersloh we have a special plant for noble mould technology. In addition we have developed locations such as in Landsberg am Lech. There we successfully produce for retail food trade brands on the basisof traditional recipes and innovative technologies, as well as bringing new Bavarian brands such as Lechtaler Original to the national market. In association with this we have closed the locations Herzebrock, Beckum, Nohra and Verl. At the same time we are consistently implementing our international growth strategy. We are growing in France and Poland and are the segment market leader in the UK. In Denmark an economic turnaround was achieved in 2018, so that after the takeover of Tican we have had a very positive development", says Andres Ruff.

Overall, the German meat industry is increasingly feeling the pressure of global competition. Countries such as Spain or the USA are flooding the international-2-market with cheaply produced goods without comparable standards, for example in farming and animal welfare. At the same time, low consumer prices for meat are presenting challenges for the entire production chain in Germany.

To strengthen acceptance in the German core market, Tönnies realigned its strategy in 2018. "We stand for enjoyable consumption of meat as part of a healthy diet. With this we are responding to consumer questions about animal welfare, farming and food safety. For example, we are encouraging politicians to enforce widespread video surveillance of areas which are relevant to animal welfare", says Clemens Tönnies. "With transparency, traceability and an open dialogue we are facing up to demands from society."

As a part of this response, since 2018 Tönnies has carried out public discussion on six sustainability topics in www.toennies-dialog.de and has provided information about objectives and measures.At the same time, together with other participants in the sector, Tönnies is developing solutions for the key questions relating to meat production.

For example, during the past months, a milestone was achieved in the sustainable development of livestock farming. With the support of Tönnies the Chamber of Agriculture in North-Rhine Westphalia has developed a new feeding concept. With Toniso feeding (animal-optimised nitrate and soya-reduced feeding concept), nitrogen excretions (including phosphorus excretions) via liquid manure have been considerably reduced. Up to 30% less nitrogen production is possible.

As the market and innovation leader for pork and beef in Germany, Tönnies is working for the sustainable development of the sector. As a processing and butchering company, the company is positioned between agricultural production and the retail food trade. "We bear a joint responsibility for the sustainable development of the meat industry. Because of this we are collaborating with agriculture", says Clemens Tönnies. "We need to recognise and financially reward the great efforts of farmers over the past years. This is an issue for the entire food chain. Meat is a healthy and tasty food. This is something which we must not sell out", appeals Andres Ruff. "The price war over food must be ended."