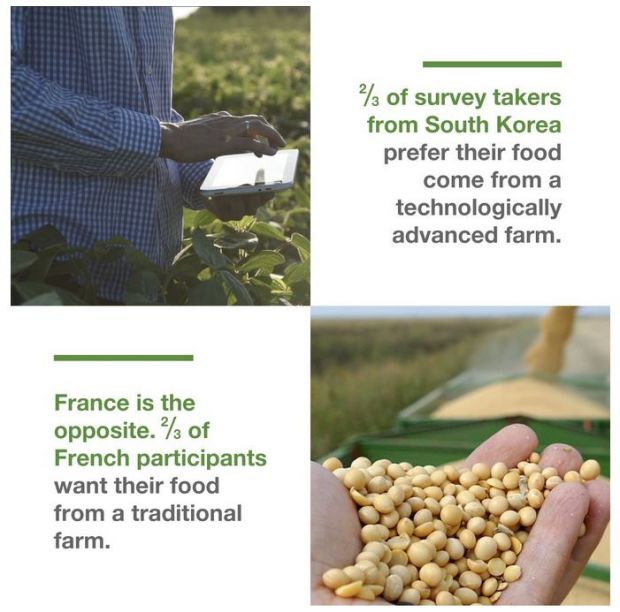 These statements from different countries show clear differences in the priorities regarding food production.

USA, Minneapolis. Technology in agriculture is how to feed a growing population, make farming more sustainable and improve the lives of farm animals, say 85% of the 3,000 participants in Cargill’s new three-continent consumer survey. At the same time, only about half of those surveyed want their food to come from a technologically advanced (versus traditional) farm.


The difference in reservations in agriculture becomes clear when comparing it to other sectors. In industries like medicine and education respondents most want to see technology used. Farming ranks third—above defense, manufacturing, retail and food.

“We know that new technologies are allowing farmers to make better, faster, more informed decisions to feed a hungry world while protecting the planet,” said Sri Raj Kantamneni, managing director of Cargill’s digital business. “We also know that agriculture is still the least digitalized industry sector in the world. That means there’s a lot of opportunity for greater investment in tech. This survey highlights that we first need to do a better job of explaining the value of new technologies to consumers.”

South Korea most positive about ag-tech

In its quarterly Feed4Thought survey, the company found markedly different perceptions of ag-tech across the three surveyed countries. South Korea was the most positive about high-tech farms - both as a source of food (70% pro) and for their potential to make farming more sustainable (95% pro).

France was the most apprehensive - with only 37% wanting their food to come from a technologically advanced farm. France and the US thought farmers should benefit most when ag-tech improves operations; South Korea chose consumers. When it comes to tech investments, South Korean and American consumers agreed the top priority should be that they “increase food safety,” while French participants said technology should first and foremost “improve animal well-being.” These statements show clear differences in the priorities regarding food production.

Ag-tech can do both

“It’s my responsibility as a farmer to make sure I’m doing a good job and thinking about nature,” says Shelby Fite of Mann Farms in Ohio, US. “Technology is making everything faster, making everything more efficient.”

Real-time scans in poultry houses, for example, use Artificial Intelligence (AI) to give farmers insights so they can maximize animal comfort and health and improve efficiency.

42% of survey takers said they’d welcome the use of sensors on the farms that grow their food. 35% would be OK with AI. Devices that affix to an animal, such as ‘Fitbits for cows’ and robotic or automated labor (e.g. robotic milkers) were acceptable to 29% of respondents.

Next came genomics. A quarter of contributors said they were comfortable with farmers breeding animals based on genetic markers for desirable traits. Finally,18% would embrace feed containing genetically modified (GM) ingredients. Younger French and American participants (aged 18 to 34) were slightly more likely than their older counterparts (aged 55+) to accept GM feed.

None of these innovations earned above a 50% approval rating, which correlates with respondents naming “consumers desire traditional products” as a top barrier to farmers adopting tech - second only to farm economics.