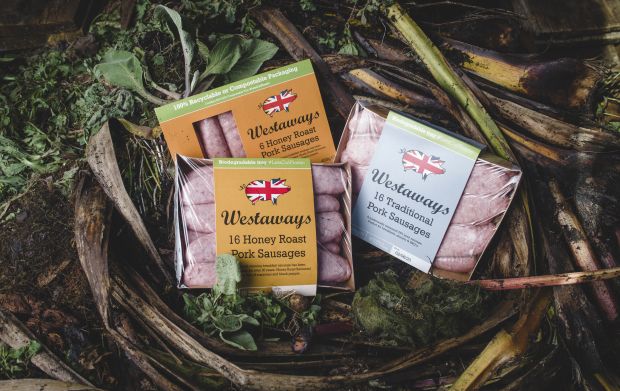 Photo: Westaways
The cling-film style wrapping which has allowed the company to make the 100% eco-friendly claim.
Related Topics:

fleischwirtschaft.com — UNITED KINGDOM, Devon. Westaways Sausages have become the first meat producer in the UK to use a revolutionary packaging that will disintegrate naturally in the compost; a major milestone in the ongoing war against plastic-use.
Facebook
Twitter

For 18 months, Westaways sausages have been packed in trays made with Forestry Stewardship Certified cardboard which is recyclable or compostable and already more than a million packs have been sold. But it is the cling-film style wrapping which has allowed Westaways to make the 100% eco-friendly claim. Westaways carried out exhaustive research before making the move and invested in machinery that has been designed to incorporate the new film wrap.

Global Trade Processing and packaging markets will continue to grow