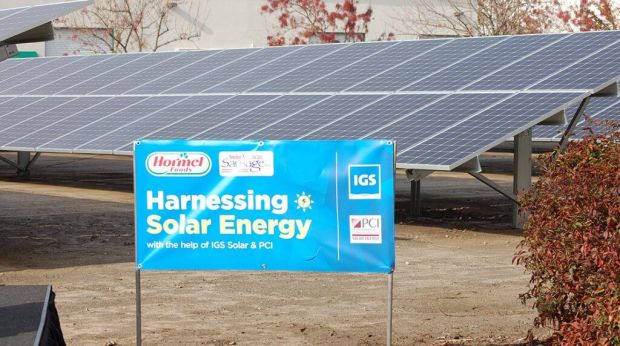 The array will help the environment by reducing greenhouse gas emissions by an estimated 288 t per year.


IGS and HOLT Renewables worked hand in hand with Hormel Foods to deliver this project that provides meaningful energy savings for the company. IGS Solar will own, operate and maintain the array. The company is assisting Hormel Foods to integrate solar generation into its energy portfolio while helping the company better control the long-term energy costs for its buildings.


The solar array consists of approximately 2,000 panels constructed on both roof and ground space. The project is projected to generate roughly 1.2 million kilowatt hours (kWh) per year – enough to supply more than 15% of the plant’s annual electricity consumption. The new solar array will help the environment by reducing greenhouse gas emissions by an estimated 288 t per year. That amount of emissions avoided is also equivalent to removing 61 cars from the road annually or avoiding burning over 314,000 pounds of coal.