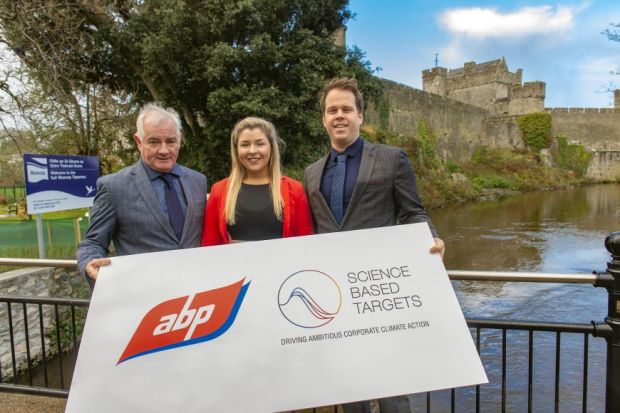 The process of validation demonstrates the company’s commitment to aligning its sustainability strategy to the global climate change goals as set out in the 2015 Paris Agreement.

IRELAND, County Louth. ABP has confirmed that its greenhouse gas (GHG) emissions targets have been validated by the Science Based Targets Initiative (SBTi).


This process demonstrates the company’s commitment to aligning its sustainability strategy to the global climate change goals as set out in the 2015 Paris Agreement.

Some of the best practice initiatives include:

● In November 2019 the company in conjunction with Teagasc and The Irish Cattle Breeding Federation announced results from its dairy beef genetic research programme, demonstrating a significant shift in carbon reductions in dairy beef. The findings have proven that is possible to reduce emissions by up to 28% in the dairy beef herd.

● The red meat processpr opened the world’s first certified carbon neutral abattoir in Ellesmere in 2015, where waste from the meat processing operation is used in conjunction with used cooking oil to provide the energy requirements for the site.

● ABP has introduced heat recovery programmes at a number of processing sites including Cahir, Wessex and C&D Esbjerg. These sites have harnessed waste heat from a number of processes and used it to significantly reduce fossil fuel consumption.

The validation by SBTi demonstrates the company’s commitment to aligning its sustainability strategy to the global climate change goals as set out in the 2015 Paris Agreement. The new targets include ghg emissions across it’s business operations (scope 1 & 2 emissions) and its supply chain (scope 3 emissions).

The red meat processor has committed to reducing its scope 1&2 emissions by 27% by 2030 against a base year of 2016. The company has already reduced greenhouse gas emissions across its operations by 28% since the beginning of its sustainability programme in 2008. ABP is also committed to leading a reduction of 17% in scope 3 greenhouse gas emissions coming from the supply chain by 2030.