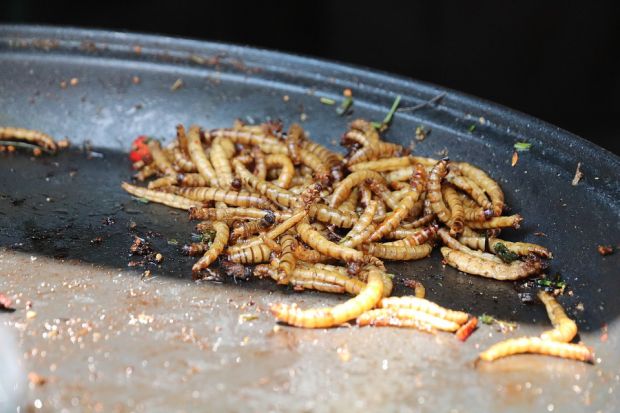 As an alternative to soybean animal feed insects are promoted, especially mealworms.

UNITED KINGDOM, London. Currently, soybean meal sourced from South America is the most commonly used vegetable protein for livestock feed in the UK, but this is problematic. As an alternative insects are promoted. This could help shift the consumer opinion of sustainable meat.


Meat substitute sales in the UK recorded growth at a compound annual growth rate (CAGR) of 8.8% between 2013 and 2018, which was significantly higher than meat at a CAGR of 1.8% for the same timeframe. This demonstrates a shift in consumer opinion towards meat, according to GlobalData, a leading data and analytics company.

Currently, soybean meal (SBM) sourced from South America is the most commonly used vegetable protein for livestock feed in the UK. However, SBM is problematic from an economic, food security and environmental impact perspective. Reliance on meat imports from South America may leave the UK vulnerable due to the unstable nature of economies within the region.

Bühler Insect Technology Solutions (BITS) is currently promoting yellow mealworms as an alternative, sustainable option for the farming feed industry, and is currently planning to install and commission a mealworm production facility in the Netherlands in addition to its current black soldier fly plant in China.

Matthew Coates, Consumer Analyst at GlobalData, commented: “Amid pressure around the perceived negative impact animal production has on climate change, meat producers should actively look for ways to increase sustainability and improve consumer opinion. Insects are an ideal livestock feed alternative for fish, poultry and pigs compared to current methods due to reduced space needed. Insects as a source of protein in animal feed is a long-term sustainable alternative to current popular livestock feeds and should be adopted by meat manufacturers in order to shift consumer opinion of meat as unsustainable.”